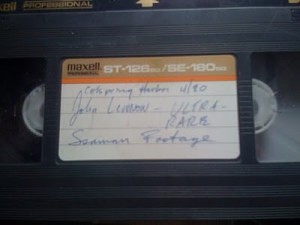 One of the more intriguing items at auction.

Roger over at WogBlog has an excellent head’s-up on a massive collection of Beatle personal items/memorabilia from Beatle author Geoffrey Giuliano and one-time Beatle designers The Fool. (A lot of this stuff—which is really mind-blowing—seems to have originated with Derek Taylor, or directly from George and John.)

I don’t know what I think about memorabilia. On the one hand, I definitely feel the attraction of it—what Beatles fan wouldn’t want a letter from George to the other Beatles asking them not to break up the group? On the other hand, memorabilia also gives off a very weird vibe. I’ll explain what I mean in a moment, after this snip from the auction’s Facebook page. Read it and you’ll see why I was moved to post about this collection.

John Lennon Yoko Ono Personal Home Recording Concerning Their Sex Lives Before And After They Began Their Relationship (A Sexual History Of Both Of Them)
An unheard original tape of John Lennon speaking to his wife amend at times is disbrued with her answers [garbled, but you get it—MG]. A HISTORY changing tape. Originally the property of John Lennon. Lennon gave a copy to Derek Taylor at Tittenhurst Park telling Taylor, “Keep it we might need it later if I ever decide to break up with Yoko.” Original cassette and CD listening copy. With history and COA from Geoffrey Giuliano. Formerly the property of John Lennon. From the collection of Derek Taylor.

Wow. I kinda can’t wait to find out what’s on that, and kinda really absolutely DON’T WANT TO KNOW. Can you imagine John and Yoko in the era of cell cameras and sexting? Running TMZ would be even easier than it is now. Channel 756 on DirecTV could be the “John and Yoko’s Sexual History channel.”

As roughly one billion people have noted before me, memorabilia is essentially a religious relic. The modern replacement of religion with celebrity is also a common thought—John Lennon might’ve caught hell for comparing the popularity of a pop combo to the Prince of Peace, but that was before fifty more years of TV. Like it or don’t, among certain generations Lennon could wear the nickname “Prince of Peace” as easily as the late J.C. (At least until this tape makes the rounds.)

“Everyone wants a piece of you”

I love me some Beatles, but there’s a thing that keeps me from getting too nutty about Beatles memorabilia, and it’s not just the lack of any spare millions. It’s the sense of a relationship, however tenuous and unspoken, between desiring something once owned by a Beatle, and wanting to own a piece of them as people. As Lennon said, “The postman wants an autograph. The cab driver wants a picture. The waitress wants a handshake. Everyone wants a piece of you.” For those Beatles that are dead, this can’t hurt them anymore—but while they were alive, I think it alienated them terribly, and was so crazy for so long they became fed up. It was precisely the kind of pressure that broke up the group; and precisely the kind of thinking that got George and John attacked by fans. Certainly it encouraged misperceptions in their own minds that made their lives much more difficult. Put it this way: lot of people in 1969 got high on acid and announced they were Jesus. When John Lennon did it, he had reasons besides the lysergic. What The Beatles were then (and what they’ve come to mean since), is as close to religion as you can get without founding churches. Lennon knew that; he felt it; he lived it.

Apart from the religious aspect, there’s a simple commercial truth at work, too. When John Lennon wrote his name on something, it became worth more money. That value had to come from somewhere, and Lennon suspected that it was drawn from him. There’s a “quote” in Dakota Days, I believe, where Lennon speaks of the toll thousands of autographs and millions of photos must’ve taken upon his elan vital. But I don’t think you have to get all woo-woo to explain this. Whether or not it’s a “transfer of energy” from the star to the fan, the creation of monetary value is real, and in a world where so much comes down to those little green pieces of paper, it’s inevitable that people who can create money by associating with an object will get no peace. Can you imagine the pilferage that John, Paul, George and Ringo must’ve suffered over the years? I suspect that kind of thing is part of the huge downside of Beatledom, which is so hard for the rest of us to see, much less understand.

If you ask me, the British government oughta give the four estates a massive tax writeoff and put everything—master tapes, personal papers, and historically important memorabilia—into a museum.  Not only for its protection, but to preserve the integrity of the historical record. I’ve been reading and thinking about The Beatles for 36 years (I’m 40) and never have I come across that Harrison memo, which changes my picture of the breakup significantly. Now that they’re gone, God knows how much our perceptions of John and George have been shaped by what’s been revealed and what hasn’t, and if The Beatles are authentic historical figures (which they obviously are) accuracy is paramount. (There could be a whole wing for John and Yoko’s sexual history! jk)

Meanwhile: what do I hear for George’s genuwine prayer beads? Do I hear thirty? Thirty-five! Forty! Forty-five…