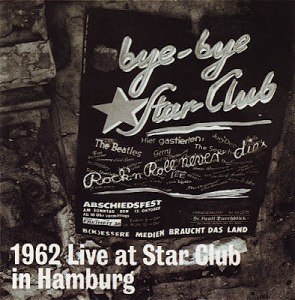 The Star-Club material has been reshuffled and reissued in a variety of forms over the years, none odder than that of 1962 Live at Star Club in Hamburg, issued in 2000 on the Walters label. Two dozen of the Star-Club songs (including most of the finest, and in the best available sound) are packaged with a booklet of notes authored by someone calling himself Gary Michael Walters—an individual whose bona fides are never offered, but for whom the label is presumably named. The first hint something might be a bit off is that the Beatles’ name is printed just once on the outer box, in tiny lettering. Clearly Walters means to trade on the Star-Club legend without incurring the legal wrath of the Beatles’ protectors.

Go inside the box, and you find a little dream world. In his notes, Walters tells of one George McIndoe, “a vagabond child of the sixties” whose travels took him to Hamburg just in time to hear, meet, and become a close ally of the Beatles. Those of cynical bent might wonder why there are no pictures of McIndoe then or now, or direct quotes from the man himself; or why, although he supposedly took many pictures of the Beatles with “his trusty Leika camera,” the booklet reproduces none of them—only a few of the more familiar Hamburg shots by Jurgen Vollmer and Astrid Kirchherr.

Walters goes on to claim that it was McIndoe, not the legendary King Size Taylor or the more recently-rumored Adrian Barber, who recorded these performances. This bold bit of invention is then filled out by Walters’s interview with a fellow named Tom Larkin. Larkin counts himself an intimate of the mysterious McIndoe, claiming the latter told him of the existence of these tapes in 1993. Larkin didn’t elect to release them until 1997, when he met our modest chronicler Gary Michael Walters, whom he knew “would treat these historic tapes with the respect they deserved.” (On the basis of what? Who is he?) The rather stupefying McIndoe saga and Larkin revelations are followed by a set of song lyrics—some accurate, some clearly transcribed by an auditor for whom English is not the first, or any, language. (The opening stanza of Tommy Roe’s “Sheila” looks like this: “She’s little, she’s my own Sheila/ You’re the only tailed/ It’s so long just to just make you my own/ How can I send the love this while.”)

It is all most bizarre. “I’m sure this will be an exciting project,” Larkin is quoted in regard to the history-making Star-Club release. Indeed it was—back in 1977, when it actually happened. Gary Michael Walters, whoever he is, has managed to construct a fantasy in a box and market it through major outlets. This incomprehensible item with its whole-cloth rewrite of history is available at Amazon.com this very moment, accompanied by several customer reviews—only one of which points out the bogus nature of the whole enterprise. Only one? Walters may already have succeeded at writing himself into Beatle history.

You don’t know whether to say “What a nerve” or “More power.” Either way, what do we have here but more mything in action? 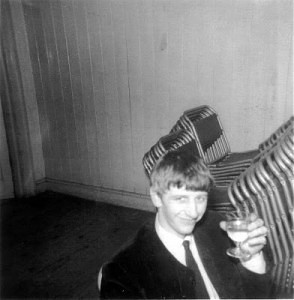 Postscript, 2009: This item is still listed at Amazon, now long out of print but easily obtainable. And a couple more reviewers take care to puncture the Walters-McIndoe-Larkin ruse, with one clever Dick suggesting “George McIndoe” as a take-off from “John Doe.” (Any anagramologists out there willing to take a crack at these names?)

Post-postscript, 2013: Read the comments below to find how some of this shook out—then draw your own conclusions, or none at all.