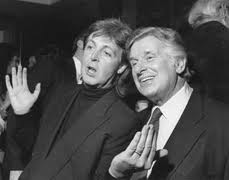 MIKE GERBER • Sad news today: Sid Bernstein, one of America’s first Beatlemaniacs and a man who helped orchestrate the peerless mayhem of 1964 and 1965, has died at 95.

“The son of a Harlem tailor,” wrote Bob Spitz, “he was convinced of The Beatles’ greatness before he ever heard them sing a note…Bernstein reached into his own pocket to book no less a venue than Carnegie Hall for a group that had no hit record and no following in America.” Then Capitol decided to really push “I Want To Hold Your Hand,” Ed Sullivan happened, and Sid Bernstein entered showbiz history.

Typically, Albert Goldman dismissed Sid Bernstein as “small-time” because he, like Brian Epstein, was unable to predict the unpredictable. Of course if they had done, and really milked Beatlemania properly, Goldman would’ve called both men “crass operators interested only in the next buck.” What Goldman fails to remember—and what we shouldn’t forget—is that nothing on the scale of Beatlemania had ever happened before. Furthermore, it wasn’t bullet-proof; once started, it could’ve been derailed in a million different ways. “I Want To Hold Your Hand” didn’t guarantee Sullivan; Sullivan didn’t guarantee Carnegie Hall; and Carnegie Hall didn’t guarantee Shea. These were all decisions, and they were great ones by smart people.

Bernstein’s instinct to put the group in Carnegie Hall was a masterstroke, and no small finagle. Before the Beatles, Carnegie Hall had been closed to rock and roll; the promoter had put together the deal by calling them a folk group. Bernstein also claimed it would be good for international relations, and maybe it was. There were even plans to record the concert, but the American Federation of Unions wouldn’t allow George Martin to work in the U.S. No Martin, no record, The Beatles said, and there the plans stopped. It was probably for the best, given the crowd’s reaction, which was so ferocious that it blotted out the music. (Lennon even shouted at the crowd to “Shut up!”) 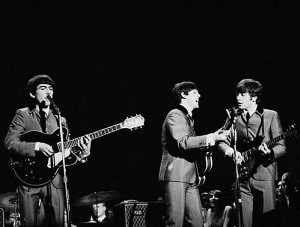 The Beatles at Carnegie Hall, February 12, 1964, probably just before John yelled at everybody.

Bernstein’s simpatico with Brian Epstein, which he discusses in the video below, was another stroke of luck. Like Epstein, Bernstein wasn’t an established figure, he was young and on the fringes of the business. Yet he had some connections, was hungry, and willing to innovate. But most of all, like Epstein, he had incredible faith in the group. By booking The Beatles into Carnegie Hall in 1964—as opposed to a bigger, more declassé venue—Bernstein and Epstein were hedging their bets in a very sensible way: a small house, but the best one. The Beatles, as they so often did, did the new thing, gave it a gloss of high culture, and trusted their talent to do the rest. Newness, high class polish, and talent—these three aspects were Epstein’s magic formula, and Sid Bernstein innately understood that.

The success at Carnegie Hall led directly to the even bigger success at Shea the following year, the apex of The Beatles on tour. These two events will loom large in any Sid Bernstein obituary, and rightly so; without Sid Bernstein, the history of The Beatles might’ve been much different. And it’s to his credit that, even in the darkest days of the 70s, he always pushed for a Beatles reunion. Of course this wasn’t simple altruism on his part; but capitalism in the service of Beatle-stuff is a philosophy I can really get behind. You?