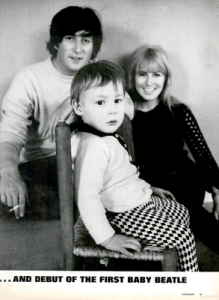 DEVIN McKINNEY  •  Seems to me I recognized the shot Michael posted below, or one quite like it … It’s evidently from the same session that yielded this shot, part of a pictorial in Life magazine’s issue of May 21, 1965. The story, “Hear That Big Sound,” is about the current exploding state of pop music and features pix and hype-nuggets on a range of current faves, some mere pan-flashes, others eventual mainstayers: Chuck Berry, Supremes, Herman (sans Hermits), Pacemakers, Righteous Brothers, Wayne Fontana, Dave Clark Five, Dreamers (as in Freddie & The), Rolling Stones (way down the list!), Beach Boys, and Petula Clark. There are also great action shots of Shindig fruggers and beach babes; and on the cover is a KKK lawyer flashing a two-fingered hand, signaling “V” for the white man’s victory. Oh, what a time.

The pop story is crowned by a spread headed “The Old Masters and Their Girls …” (at the ages of 22-24, the Beatles are elder statesmen of Hip), comprising fab shots of George with Patti, Paul with Jane, and Ringo with Maureen; and, on the facing page, John, Cynthia, and, in his first public appearance, Julian:

The photo is credited to Henry Grossman, who started snapping the Beatles in 1964 and kept on their arses for the next four years. He’s published one creamy and hyperexpensive book of Beatle pics, and plans another; go here for the poop.