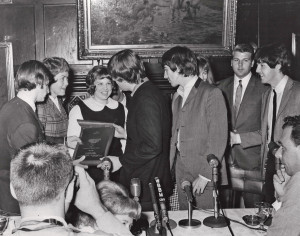 Folks, print publishing may be dying (says the publisher of a magazine) but one subgenre is going quite strong — books about The Beatles. It’s a rare month that I don’t receive an email from a publisher, publicist or author telling me about a book they’re sure Dullblog readers will enjoy. We try to cover as many of them as possible, but so many slip through the cracks. Ivor Davis’ book, for example, has been glaring at me for years (in a way that Ivor himself would never).

So I’ve decided to open a new feature on the site, loosely titled “First 1000 Words.” In it, we’ll post an excerpt of a Beatles-related book that’s come over the transom, so that you guys can get a taste and, perhaps, plunk down your hard-earned. It probably won’t be the first words, nor exactly a thousand of them; and if two lies in three words doesn’t tell you exactly the kind of gutter-press ethics you’re dealing with here, well then…

But enough preamble: here’s a chunk of 16 in 64, by Marti Edwards and Joe Carroccio. It tells the story of how Marti, the President of the Chicago Beatles Fan Club, actually got to meet the Fabs themselves — and what happened after that. Enjoy! —MG

The long awaited day of September 5, 1964 had finally arrived.

We were able to park right near the Stock Yard Inn on the north side, and the Amphitheater was on the south side of the Inn. We were confused at first as to what to do next, since we were so early for the concert. Since Armour & Co. had many meetings and events at the Stock Yard Inn, my dad was familiar with the layout. He suggested that we all go inside, sit and have a coke while we waited.

The fellow sitting right next to our dads at the bar was none other than Derek Taylor, the Beatles Press Manager.  I was dumbfounded and couldn’t move for a moment. What should we do? Then at the same time we all said, “Let’s go tell him about our plaque!”

Jan, Linda, and I jumped up so fast that we knocked over a chair. We converged on Mr. Taylor, all speaking at the same time. “Slow down, how did you girls get into the bar,” Mr. Taylor asked. My dad explained that I was his daughter and that we had a large Beatles fan club. As fast as we could, we told Mr. Taylor about our club and our plans to present the plaque to The Beatles. We told him how hard we worked on it, but that the pass was recalled. He said he’d like to see the plaque.

Mr. Taylor said the plaque was beautiful and why didn’t we just present it to ‘the boys’ ourselves? “Can we really?” we shouted. He grabbed a sheet of paper with The Stock Yards Inn logo written on the top and scribbled a note that read: “Please let these girls enter the Press Conference; they are a fan club.” Then he signed his name… Derek Taylor. We all shrieked with joy and thanked him over and over. “See you upstairs,” he said.

We lined up at the designated spot near the staircase. The Andy Frain ushers were trying to let a few upstairs at a time. It was such a mad house, and I was afraid we’d be trampled. The three of us lined up holding the plaque, with the three dads standing behind us. I tightly gripped the note from Derek as we approached the usher.

You would think that teenage girls just about to meet The Beatles would be worried about their appearance. I did not give my makeup or hair a single thought, nor did Jan and Linda. We were just so stunned that we were actually at the conference. Linda, Jan and I looked at each other and smiled. Can this be really happening, or were we dreaming?

Derek Taylor climbed onto the raised stage. There was a table with four chairs on the platform and many microphones. He addressed the Press and told them that there would be several presentations and then the Beatles would be happy to answer their questions. The Beatles entered the room on the opposite side from our table. Everyone stood up to get photos and ran to that side of the room. By the time we got there they were already talking with fans and press. I saw each one, but couldn’t find Ringo in the crowd. I remember asking Jan where the heck was Ringo. The fellow standing right in front of me turned to me and said, “Here I am darling.” It was Ringo! Standing right in front of me, I almost fainted!

We were asked to take our seats. Linda, Jan and I went to the table that Mr. Taylor had told us to sit. It was then that I realized that I had nothing prepared to say. What was I going to say? I asked Jan and Linda to help me think of something quick.

Things began to happen up on the stage, but I was not concentrating on what was going on. I just looked at the Beatles and kept trying to figure out what to say. There was a fellow presenting Ringo with a gold drum. Someone had done a charcoal drawing of the cover of their new record album, “Meet The Beatles.” I remember thinking that I should have done a drawing for them too. I started to say something to Linda and noticed that George was looking right at us. I know that it could not have been seen, but I’m sure I turned all shades of red. Then I told myself that now was not the time to be shy.

Mr. Taylor nodded for us to approach the platform. We stood to the right and behind the platform. I was in deep thought as to what I should say when I presented the plaque. I came out of my trance when John Lennon turned to us, made a crazy face and waved his hand behind his back.

Derek Taylor leaned over to me and said that in just a moment he would introduce us. He leaned into a microphone on the table and said that three members of the Beatle People Fan Club will now present The Beatles with an honorary plaque. Suddenly my knees were very shaky and weak, and I couldn’t feel my legs at all. The plaque felt like it weighed a ton in my arms. Would I be able to step up onto the platform without falling? I felt like I was about to drop the plaque. Jan and Linda were on each side on me as we stepped up on the stage and there we were, face to face with John and Ringo.