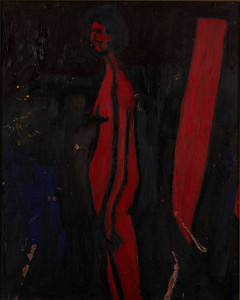 No, this isn’t THAT self-portrait–the home movie of the same name, depicting John’s penis in various states of erection (which Yoko has kept under wraps and Beatle fans have been trying to find ever since), but this, an early oil painting done by the man himself, up for auction by Cooper Owen Music Media Auctions in 2014.

According to the auction site,

John Lennon’s first ever self-portrait that he painted at art college in 1958 has emerged for sale in our next auction. The abstract work in oil depicts a red figure side-on with unflattering features including ‘moobs’ and a large stomach.

Lennon was at Liverpool College of Art with Stuart Sutcliffe, the Beatles’ original bassist, and this portrait is thought to have been painted as part of a project on their course.

During his time at college Lennon became known for drawing cartoons and misshapen, satirical characters. He later dropped out to concentrate on his music.

The portrait, which has been authenticated by the Stuart Sutcliffe estate, has Lennon’s name printed on the back, as was the method at his college. It is sure to attract massive interest not just because it is unique but because 1958 was a hugely important year in Lennon’s life.

It was during those 12 months that his mother was killed after being hit by a car driven by an off-duty policeman and he also met his first wife Cynthia. He had started at art college that year and it was also in 1958 when he, Paul McCartney and George Harrison first played together.

However, this work shows his talent for art, a hobby that later in his life he returned to. The figure in red is set against a black background and looks drawn and despondent. The distinctive spectacles are absent and it appears he had turned his skill for unflattering depictions on himself. 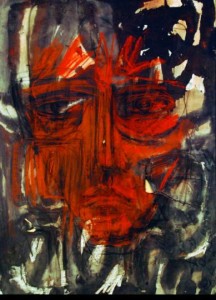 My first reaction was that the self-portrait doesn’t seem Lennonesque, man boobs notwithstanding. Could it have been a painting of John, by Stu?  Cooper herself described the Lennon self-portrait, which went on sale for 3 million, as “similar to Sutcliffe’s work of the same period,” so maybe it’s possible.

At any rate, I thought it was an interesting find and wanted to share it with y’all.

(Edited to Add:  if you want to see a collection of Sutcliffe’s art, here’s a link.  He really had a wonderful talent, IMO.)