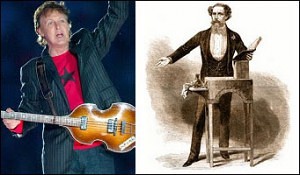 NANCY CARR • If you’ve ever wondered why Paul McCartney writes story songs and loves performing, or why his sentimentality sometimes runs away with him, I hope you’ll enjoy these ruminations on his links to a Victorian forebear.

Looking at Paul McCartney’s personal and artistic similarities to Charles Dickens helps explain a lot of things. It illuminates why McCartney is hugely popular but often critically reviled, why he is driven to make money despite his great wealth, and why he tirelessly performs live. Most importantly, it brings his particular gifts into focus.

Often McCartney is compared to John Lennon and criticized for being less confessional, poetic, or political than his songwriting partner. But appreciating Lennon’s variety of excellence shouldn’t entail dismissing McCartney’s. Lennon was a lyric poet in the vein of Wordsworth, Shelley, or Keats: his work is powerfully personal, often transparently so. McCartney is a storyteller and performer, as Dickens was.

McCartney and Dickens share a surprising number of character traits. They determined early to achieve financial security, after childhood brushes with poverty. They idealized children and domestic life even during their years as roving London bachelors. They approached their artistic fields as crafts to be mastered, ardently pursuing popular success. Their ambition and desire to run things were sometimes admired and sometimes resented by colleagues.

From the first, both men were also compulsively productive. For much of his career, Dickens combined writing stories, novels, and the occasional play or travel book with public readings and with managing, editing, and contributing to his own periodical (Household Words, followed by All the Year Round). In the Beatles years McCartney’s productivity sometimes exasperated Lennon, who felt pressured to keep pace. Since the breakup, McCartney has regularly released solo albums while also finding time to write a movie, score a ballet, compose and play music in a range of genres, and run his own corporation, MPL.

Unsurprisingly, for both men producing at such a rate resulted in works of varying quality. This reality, combined with Dickens’ and McCartney’s investment in audience response, led to ego-bruising encounters with criticism. Despite popular success, both men were stung by accusations of sentimentality and shoddiness, and both constructed a public persona as a screen for this vulnerability. Dickens cultivated his image as “Boz,” the friendly champion of the common folk, and McCartney has usually played the role of upbeat performer still in touch with everyday people. These personas are not lies, I would argue, but selective presentations of their real personality traits and values. Born performers, McCartney and Dickens strove to combine getting the audience and acclaim they needed with protecting a private life genuinely important to them.

This desire to perform but to shield the private self helps explain why Dickens and McCartney love telling stories. Rather than speak in first person, both often communicate obliquely through characters. Dickens was first known and most widely celebrated for creating indelible characters like Mr. Pickwick, Oliver Twist, David Copperfield, and Scrooge. In a few words, Dickens could create a character with a distinctive look, attitude, and way of speaking. When he died, one periodical memorialized him with a drawing of his empty chair, surrounded by a cloud of his immortal characters. 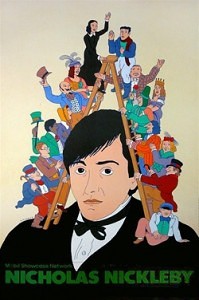 McCartney shares Dickens’ fascination with characters, and has said Nicholas Nickleby is his favorite book. In the Beatles years McCartney wrote many short stories in song, including “Eleanor Rigby,” “Lady Madonna,” “Rocky Raccoon,” and “Maxwell’s Silver Hammer.” “Penny Lane” is a Dickens novel in miniature, with its large cast of characters and distinctively English setting. It’s artfully narrated, too: that repeated “meanwhile” underlines the simultaneity of the characters’ actions, adding motion and breadth as the multiple plots in Dickens’ novels do. McCartney has continued to write narrative songs throughout his solo career, with “Another Day,” “Jenny Wren,” “She Given Up Talking,” and “Mr. Bellamy” as leading examples.

Both McCartney and Dickens wanted not merely to write about, but to perform their characters. While writing, Dickens would often jump up, make faces, and try out speech mannerisms. He gave sensationally successful public readings from his work, touring both England and the U.S. One of his favorite pieces, the brutal murder of the prostitute Nancy in Oliver Twist, was so intense that women sometimes fainted and had to be carried out. Other selections regularly moved huge audiences to laugh or cry. Dickens kept giving readings even as he grew ill, and his performance schedule probably hastened his death. How much he was driven by money and how much by love of the stage is a continuing point of debate.

As a live performer, McCartney is just as persistent and driven as Dickens. McCartney’s sometimes hectoring insistence, in the Beatles’ last years, on getting the group to play live again contributed to its meltdown. When he formed Wings, McCartney was willing to drive a van around the countryside and play small university halls to get back on stage. The 70s, 80s, and 90s all saw successful McCartney tours, and the last several years have featured some of his most impressive shows. He’s clearly giving audiences what they want, with setlists that cover the highlights of his entire career, and has been charged with doing it mainly for money. His enjoyment of performing is palpable, however, and it’s hard not to admire his dedication: at 69, he’s giving concerts that last three hours without an opening band or a break. It seems probable that, like Dickens, McCartney will go on performing until disability or death prevents him.

The Future of McCartney and Dickens

This pattern of similarities makes me think that time will improve McCartney’s artistic reputation. His poorer work will be justly forgotten, as Dickens’ lesser productions have been. Who is now beating up on Dickens for Master Humphrey’s Clock, Martin Chuzzlewit, The Uncommercial Traveler, or his play The Village Coquettes, not to mention dozens of fair-to-middling articles and stories? Just as we now appreciate Dickens’ higher-quality work and leave the rest largely alone, so may McCartney’s best work endure. Perhaps one day, like Dickens, he will get a biographer able to regard his faults and excesses with some sympathy and appreciate his artistic fertility and performing tenacity.