DEVIN McKINNEY  •  Again showing our contrarian streak, we thought we’d differentiate ourselves from everyone who wished “Sir” “James” Paul McCartney (jus’ Paul to us) a happy birthday yesterday—which, true enough, was his actual date of birth, but isn’t it always nice to get something the day after too? (Or is that Christmas?)

Sorry for the miss, Paul. But you and we are like an old married couple, and one of us is bound to blank on an anniversary once in a while.

Beatleheads may celebrate Paul’s lifespan and selfishly luxuriate in his giftings over at 30 Days Out, which has agglomerated an amazing list of McCartney song covers from the likes of Foo Fighters, Wilson Pickett, the Ron Eschete Ensemble, Elvis Presley, the Heptones, and Daffy Duck. What other artist could unite in common celebration such a Mötley Crüe (a band also represented on the covers list)? In the words of English theologian Robert South (1634-1716), “If there be any truer measure of a man than by what he does, it must be by what he gives.” 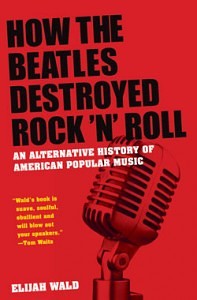 Less importantly, you can read my modest weigh-in on Elijah Wald’s How the Beatles Destroyed Rock ’n’ Roll: An Alternative History of American Popular Music at Bookforum. Retract your fangs, gang: Wald counts himself a fan of the Fabs, especially their early, rootsy work. The book’s troubles lie elsewhere …

“Millions heard the sound of freedom in the Beatles’ music. Elijah Wald hears a death knell. In the songs of the Fab Four, he argues, pop music completed its decades-long transformation from a kingdom of democratic dance and authorless song to a lonesome land of private pleasures and isolated audiences. The result was segregation along lines of race as well as taste…”
Continue reading at Bookforum