Some thoughts on “Jailhouse Rock”

[Folks, this post may be a little rough because I’m having real trouble typing into the WordPress backend. Forgive any typos, etc.—MG] 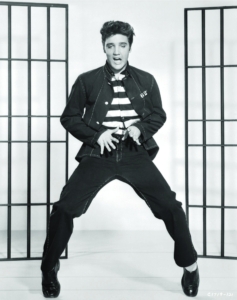 Elvis the Pelvis comin’ at ya

I’ve never seen Elvis’ breakthrough 1957 movie, Jailhouse Rock, because truth be told, I’m not the world’s biggest Elvis fan.  But I decided to watch it, specifically with an eye towards comparing it to A Hard Day’s Night just seven years later.

We talk a lot about masculinity here on Dullblog, and The Beatles’ relationship to older models of manhood. The first thing that struck me about Jailhouse Rock was the inciting incident: Elvis is sent to prison for killing a man in a bar brawl. Of course he had his reasons—he was defending a B-girl from some cad (her husband?) who wanted to rough her up—but right from the start, we see this movie lives in a vastly different world. A world by and for grown-ups. A world of grown-up actions (drinking, fighting) and grown-up problems (dying, jail). It’s as if AHDN was set in Hamburg, and Paul accidentally beat someone to death. “What do we do, Shake?” “Time, Paul. Hard time.”

Then, 24 minutes in, Elvis is punished in his part in a prison riot by being stripped to the waist and lashed. Elvis snarls and squirms beatifically, in a scene worthy of Beatles fanfic.

Compared to this harshness, this brutality—“Hey, let’s make the latest teen heartthrob a murderer, stick him in a brutal Southern prison, and show him being tortured”—AHDN seems like it’s inhabited by a quartet of grown-up children. The stakes are also childlike: whether the show comes off on time is, from an adult’s perspective, almost totally immaterial; after all, we (and they) know that they are The Beatles, one of the most popular acts in the world. Victor Spinetti will live if they have to swap in something. AHDN’s tension is really “will  Ringo still be friends with the other Beatles, or will he stay mad at them for making fun of his nose?” What is it about the magic of The Beatles that allows us all to look past this nonsense?

Elvis, in Jailhouse, is unquestionably an adult, doing adult things, paying adult penalties. He appeals to kids, but he isn’t one of them, and he’s not even a stand-in for them. He lives in the same world, the same version of masculinity that had 18-year-olds getting jobs, raising families, going off to war.

The whipping embitters Elvis; where he was formerly deferential to authority, he now sneers at the Warden: “You’ve been just like a father to me, sir.” I immediately thought of the scene with The Beatles in the train-car, where they spar with the stuffy businessman. Unlike Elvis, we’re not shown The Beatles suffering unjustly before this scene; their antagonism isn’t personal and earned—it’s reflexive, generational. And it’s so widely felt throughout the Boomers that audiences didn’t even question it. The Beatles—standing in for their much younger, much less worldly fans—mouth a kind of generalized alienation that, in 1957, you’d find in poems like HOWL…but not in the teenybopper set. By ‘64, that alienation had percolated throughout the culture, on both sides of the Atlantic, and had been turned from a critique of postwar consumerism into a sort of  acid cheekiness. When George puts down the TV star, he’s not mad at being commodified, catered to as a demographic—and once again, it’s not his demo, but a much younger one—he’s mad that she gets it wrong.

After getting out of the slammer we see Elvis check into a fleabag hotel; he then takes some of his prison wages to a pawn shop and buys a guitar. In the next scene, he’s at a club (quite possibly a strip club), looking for a job. A pretty song-plugger sits down next to Elvis, but he’s only interested in the mechanics of the business. He’s a brusque asshole.

When the owner brushes him off, he leaps up on stage and sings a number. Then, he leaps back down and smashes his guitar basically AT a bar patron who laughed while he was singing.

So: it’s no surprise that a young John Lennon saw this dude and felt kinship. The ironic thing is that when Lennon had achieved his dream and was part of his own Jailhouse Rock, his rebellion was sniffing carbonation from a Coke bottle or writing “TITS” on the pad of a reporter. It must’ve felt pretty light and silly to him; childish, even. But that’s what I’m feeling more and more: Jailhouse Rock was an old-fashioned rags to riches musical, a tale of morality, that just happened to star Elvis; AHDN was a very finely crafted children’s movie. This is why I think critics were so quick to make a comparison to the Marx Brothers. Like the Marxses, The Beatles were talented and tortured grown ups playing like children—but unlike the Marxses, The Beatles are stuck in a setting that pretends to be their real life. There is no love interest in AHDN, so the audience can play that role.

We next see Elvis recording a demo; and then, when he’s unhappy, doing it a new way—discovering his special sound. “Sing it how you feel it,” Peg the song-plugger says. “Put your own emotions into the song, make it fit you.” In other words, assert your own taste, your individuality—the seed that sprouted a whole new kind of pop culture…including The Beatles. Armed with this song from his soul, Elvis and Peg then go around to record companies trying to get them interested. In some ways, Jailhouse Rock is basically a how-to; AHDN is what’s waiting for you when you make it.

When the song plugger sells the record—to a new label looking to make its mark—Elvis basically negs her. Peg buys dinner. Peg then takes him to a party with her parents—who don’t even buy an eye at Elvis’ criminal record. They put on some jazz, and namedrop Dave Brubeck and Paul Desmond. When they ask Elvis’ opinion of jazz music, he says, “Lady, I don’t know what the hell you talkin’ about,” and walks out. Peg follows him out, and gives him a piece of her mind. He responds by grabbing her and kissing her. Elvis is, in a word, an asshole. Jailhouse Rock is real old-fashioned toxic masculinity.

Not only are The Beatles not assholes in AHDN, they certainly aren’t walking around redpilling women with insults. As I said, they’re not kissing women at all. They like women but—like teenagers under the careful eye of adult authorities—can never express those feelings. Elvis is a jerk—“it ain’t tactics, honey; it’s just the beast in me”— but also unquestionably an adult.

Elvis’ record comes out—but it’s been re-recorded by the label’s big, bland star, Mickey Alba. Elvis has been screwed! He goes to the label and slaps the owner of the label. “Go back under your rock, you snake!” Imagine the same thing happening in the Beatles’ movie—them striding into Swan or something, and beating the hell out of them for not pushing “She Loves You.” Inconceivable.

Elvis decides to start his own record company, and Peg quits her job. They find a lawyer, and make him Elvis’ manager.

Until now, all the songs in Jailhouse Rock—I feel I should mention them—all sound the same, to me at least. According to the credits, most of them were written by Lieber & Stoller, but I’d be surprised  if they spent more than a long weekend.

We see the couple hoofing it around, trying to sell Elvis’ record; and Peg uses her connection with a friendly DJ to get the record played…as the background to a dog food commercial. (Can you imagine The Beatles’ material being treated in this way in AHDN, as satire?)

Fans call in, and he plays it. It’s a huge hit! Elvis is a star!

The famous scene—and only great song in the movie—is “Jailhouse Rock,” and exactly the kind of singing-dancing extravaganza that The Beatles make fun of in AHDN. They may be kids, rather than adults, but they are wised-up kids. The Beatles’ version of this number is probably the field scene, where they…act like kids.

Elvis goes to Hollywood—“Climax Pictures” is a moniker worthy of Terry Southern’s Blue Movie—and Elvis and a bored starlet see the sights in a sort of wan parody of fame culture.

By this point in the movie, we’re seeing Jailhouse Rock turning into AHDN—Elvis is shown acting in a movie, but he kisses the starlet and she falls for him. There’s actually “Tender Trap” playing in the background—a piece of the kind of music that Elvis and his fans were destroying—which is utterly unthinkable in AHDN. By the time of AHDN, the revolution was complete,  and playing another kind of music could only be done for laughs, as the rehearsing dancers flop and caper.

Elvis is portrayed as a big-shot movie star, whose friends think he’s gone show biz. He’s cruel to his old cell mate. The last 20 minutes or so are about a record deal, and Elvis is a money-grubbing asshole.

After Elvis forces Peggy to take the buyout deal, his old cellmate beats hell out of him, hitting him in the throat. An ambulance rushes Elvis to the hospital, to the strains of dramatic music. Will Elvis ever be able to sing?

Not fighting back in the fight “was an act of true love,” Peggy says to a silent Elvis. “Don’t be afraid to love.” I imagine the young Beatles hating this part, and the distance between melodrama like this and AHDN is the distance between the Old Showbiz of the 50s and the New of the 60s.

In the climatic scene, Elvis sings in a whispering voice that strengthens; it’s a private moment, a private victory. Compare the final scene of AHDN—which is never in doubt—a public performance with the Fabs performing for us, their playmates, their companions, their only lovers, their adoring audience.