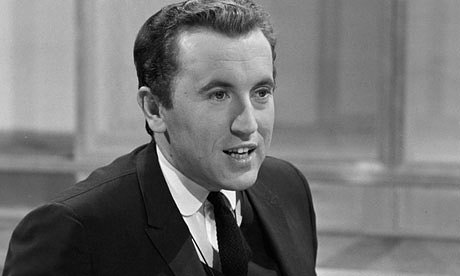 This Was The Guy That Was

David Frost has died, suddenly it seems while on a cruise ship, at age 74.

The most prominent overlap between The Beatles and David Frost was, of course, his involvement in their 1968 promo film for “Hey Jude” and “Revolution,” which I’ve embedded at the end of this post. But there’s much more to say about it than that. Frost was a quintessential “mid-Atlantic man” in the Beatle and solo era, and his passing is another reminder to examine that time, and celebrate the blending of American and British pop culture which made it so special.

The Beatles and the Satire Boom

One could argue, and I might, that the Beatles weren’t spawned by the music scene, either in England or America—their form is too original for that—but that they are the last, and greatest, expression of Britain’s so-called “satire boom.” If you don’t want to click the link, that refers to a group of British writers, cartoonists and performers who emerged between 1960-63, and created many of the forms comedians take for granted today. (As The Daily Show, for example.) Though it’s common, and accurate, to underscore the affinity between The Beatles and The Goon Show, they also bore the distinctive marks of having followed the Satire Boom. “Are you a mod or a rocker?” the woman asks Ringo in A Hard Day’s Night. “Neither,” he says. “I’m a mocker.” That’s not Goon humor, that’s Satire Boom wit.

Comedy is a form of music restricted to the head, and before Britain could spawn the Beatles, the ground had to be prepared by another quartet of geniuses, a comedy troupe called Beyond the Fringe. Would Beatlemania have happened without the Satire Boom happening first? Probably, but it might’ve been smaller, and more uncertain; after BTF had liberated the head, the way was clear for the body to follow. It’s not too much to say that the Beatles—especially the early, Epstein-crafted brand—was Beyond the Fringe, The Next Generation.  If The Beatles were musicians with a gift for comedy, BTF was the reverse. Like the Beatles, they were totally unexpected, totally new, and utter game-changers; imagine Jon Stewart and Stephen Colbert at their best, but as kids just out of college, writing a new kind of satire that made everything else seem like vaudeville.  Cook, Miller, Moore and Bennett really were The Beatles of comedy and we know this because, as with the Beatles, their success spawned an entire new branch of the culture industry. They, like The Beatles, set the rules we’ve followed ever since. 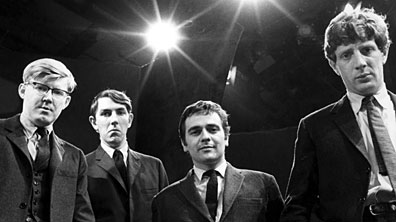 David Frost is NOT in this picture.

So where does David Frost come in? Like Mick Jagger, David Frost was an ambitious middle-class kid looking around for a way to make his fortune. Satire was a career move for Frost, not a personal statement or act of desperation. He sensed the world was changing, and his genius wasn’t in origination, but leaping at the right time, or knowing a good thing when he saw it. Like Mick, Frost used pop culture as a route to joining the Establishment. And also like Mick, Frost’s success was an expression of market forces, a Step Two commodification of something new that had arisen organically and unearthed a desire too large not to be exploited further.

But that’s where the metaphor ends; unlike the Stones, who never came close to eclipsing the Beatles, David Frost quickly became more influential than BTF, who split in 1964 after a successful Broadway run, while Frost leveraged “That Was The Week That Was” into an enduring career as an impresario and personality. Peter Cook, first among equals in the Fringe, harbored great bitterness about this, feeling that it was precisely Frost’s lack of genius that made him so successful. He famously said that “the only thing in life I regret is saving David Frost from drowning in Connecticut in 1964.”

Cook used this line as a riposte to questions about how he never really fulfilled his early promise, and his later years were ones of decay and powers wasted. He—like Lennon—died too young on the verge of a comeback. Whereas David Frost —like Jagger, at least in my opinion—perhaps overfulfilled his gifts, and became a sort of institution in the process. 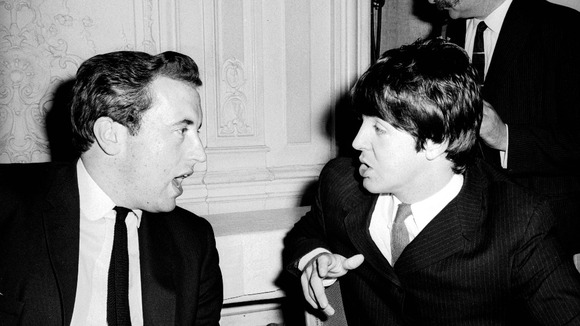 David Frost and some guy

“An old person’s idea of a young person”

But I come to praise David Frost, not to bury him. Much of the resentment towards Frost strikes me as the very upper-class, very British horror of appearing to try too hard, or indeed try at all. It’s the same “money shouldn’t matter” attitude that Brian so often affected, which allowed a bunch of toffs to abscond with all the profits from Seltaeb. I suspect that what was really improper wasn’t as much what Frost did, but in someone NOCD having a bit of money and/or power.

The Sixties were a revolution, and every revolution needs bridging characters, people who ease the rest of us from the old world to the new. If Frost wasn’t Cook—just like Mick wasn’t Lennon—all four were expressions of a force that lasted from about 1960 to 1980, and had certain signature features. Irreverent, but intelligent; critical, but tempered by a fundamental positivity and optimism; fiercely democratic, and for the expansion of rights and opportunities; and possessed of an unshakeable belief in popular culture as a valid art form, and means of social improvement.

Frost was a prime example of the type I find so dear, the “mid-Atlantic man,” a Brit with a love for America or vice-versa, that did so much to create the media-culture of my youth. If all Frost had done was help birth Monty Python, that would be reason enough to celebrate him. But with his Americanizing British TV, and his lending British gloss to a calming corner of America’s frazzled brains, he did more than that. He helped turn a fascinating pop cultural moment—the Satire Boom, and the great intelligent questioning and cultural/social/political opening-up it stood for—into a durable new vision of the world. That was why he was the right man to interview Nixon, and why he asked the questions he did. Back in the day, people who dismissed Frost as cheesy or unctuous didn’t know how good they had it. If you wish to know the difference between Sixties culture and how wrong we’ve gone since, compare David Frost to Simon Cowell, and weep.

In addition to the famous “Hey Jude” and “Revolution” clips, Frost crossed paths with The Beatles many times, individually and solo—nicely summed up by this page. I’ll add a bunch of them to this post over the next few days. This association was still operating in 2012, when Paul famously told Frost that Yoko wasn’t responsible for the break-up. I’ve embedded that interview below.

Hey Jude | The Beatles | The David Frost Show 1968 from rogerna on Vimeo.

Revolution | The Beatles | The David Frost Show 1968 from rogerna on Vimeo.