Beatles in the 1970s: Melting and Crying

I‘m an inveterate haunter of used bookstores. I love the physicality of books, and seeing how publishers chose to present subjects at particular places and times. Today I give you two 1970s finds, both British paperbacks, that feature melting or crying Beatles. 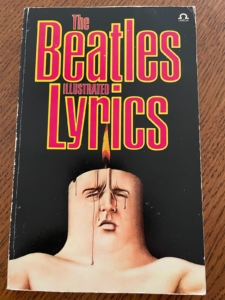 This edition of The Beatles Lyrics was published by Omega in 1975 and features an introduction by (cringe) Jimmy Saville. Though the book includes no cover illustration credit, commenter Dan pointed out that it appears in Alan Aldridge’s The Beatles Illustrated Lyrics (it’s in volume 2, published in 1971), and commenter meaigs further noted that the illustration is by John Holmes. This is not just the creepiest Beatles book cover I’ve ever seen — it’s also one of the most emotionally evocative. The Beatles have burned themselves for our benefit, this cover seems to say — what wonder that they broke up? They literally burned out, apparently. To me the Beatle candle looks more like Paul McCartney than any of the other Beatles: an interesting choice on the artist’s part. 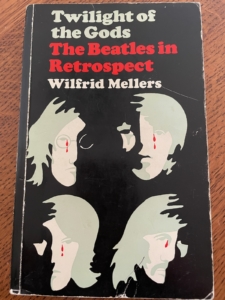 This study of the Beatles was first published in 1973; this edition, by Faber & Faber, appeared in 1976. The cover is by Caroline Mellers, about whom I could find no information. It’s an interesting mashup of Let It Be-era Beatles and a more With the Beatles / Meet the Beatles aesthetic. Here the Beatles aren’t merely crying; they’re crying blood. And the “in retrospect” of the title reads, against these images, as if the Beatles didn’t just break up, but as if they died.

Note: I edited this post on 4/18 to include the information about Alan Aldridge and John Holmes. — NC

The Beatles and the Historians