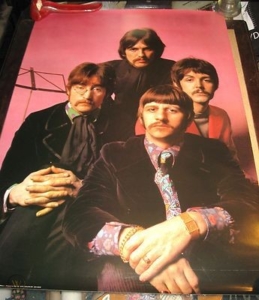 Last night, I had the most amazing dream, one of my favorites ever.

I was flying on a jumbo jet from New York to Los Angeles, with my brother and father. That’s not important. What is important is that the jet was an amazing flying museum of all these wonderful Beatle artifacts, like a flying exhibition. In addition to all sorts of personal items and memorabilia, there were amazing photos I’d never seen before, and even life-size mockups of the stages at the Kaiserkeller and The Cavern.

Then, we landed in Dodger Stadium, smacking into some things. I thought, “Oh well, this plane isn’t going to fly for a while.” But the terminal continued the exhibit, and there was even more stuff. I looked at everything, having a wonderful time.

I turned a corner, and John and George were sitting at a small cafe table having tea and talking. They were dressed in full psychedelic regalia, like in this poster I had in my room growing up. John had his leg crossed and I could see he was wearing these wonderful trippy red socks. I took out my phone and snapped a picture of them. When they looked over I said, “Sorry guys. Didn’t mean to interrupt you. I just loved John’s socks.”

Then I woke up. This dream came from my longtime hope that there will be a vast Beatles museum someday, and that Yoko’s quirk of collecting all sorts of items and photographs, along with Paul, George and Ringo’s memorabilia, will be turned into a collection available to scholars and the public.

Do any of you have Beatle dreams? I have them regularly, perhaps more than any other type of dream, and they are always really deeply enjoyable. Share any favorites of yours in the comments.

The Worst Beatle Waxworks Ever