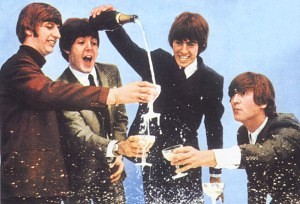 When you’re a Beatle, every day is New Year’s Eve.

It’s New Year’s Eve, that most unabashedly alcoholic of holidays, and so my mind turned to an obvious question: if you were making a drink called “The Beatle,” what would it be? Drinkify.org (.org? is it educational?) offers this opinion: “6 oz. of Mezcal, garnish with an olive.”

Mezcal? Why mezcal? That has as much to do with John, Paul, George and Ringo as rice wine with baby mice.

What springs to my mind immediately — as it does yours, too — is Scotch and Coke. Was it in “Cellarful of Noise” where I read that “we all celebrated with Rum, and Scotch and Coke which was becoming a Beatle drink even then”? Indeed it was, as excerpted on Anthology 1:

But that’s a kid’s drink — surely the post-Mania Beatles weren’t still sucking down Scotch and Coke at the Scotch of St. James. In fact, they might not have been drinking much of anything; by Help! they seemed to be on a strict diet of pot and water.

During the early 70s, John famously discovered brandy alexanders, much to the dismay of Tom and Dick Smothers. The recipe’s below, in case you want to enact your own Lost Weekend:

It turns out that a lot of people have tried their hands at “a Beatles-themed cocktail.” This thread is a goldmine, the biggest nugget being:

“At my restaurant, the Good Cook, the bar manager Stephen Taylor and I invented the Helter Skelter. It’s a coffee-based cocktail (working in a kitchen, you always need a caffeine kick) but it’s fruity and refreshing as well. You peel the skin of an orange all in one piece, then sit it inside a tall glass to give a helter-skelter effect. For the drink, put 10ml crème de mûre (mulberry liqueur), 10ml cassis, 20ml fraise and 10ml cherry brandy into a cocktail shaker with 50ml hot filter coffee and ice cubes.

Shake, then put some crushed ice into the glass with the peel, strain the coffee mix over it, and top up with 50ml ginger ale. The orange, fruit liqueurs and coffee make it almost puddingy, but it’s not too sweet.”

Personally, I’m not ingesting anything called a “Helter Skelter,” no matter how puddingy it is. I’d be afraid there’d be PCP in it.

Spice Kitchen and Bar has created a review of the best home cocktail machine for you to prepared your cocktails like a bartender.

A lurker named “Flowers” really warmed to the task, as you can see:

But the thread belongs to “Matthew Gallant,” who offers the Eleanor Whisky:

Of course, the perfect Beatles cocktail would consist of four ingredients, each essential, all in perfect balance. One would be strong, smoky, and complex; another light-seeming, but with intricacies discernible to the proper palate; another acid, almost stern, but playful and exotic; and the last the perfect mixer, and moderately priced, besides. 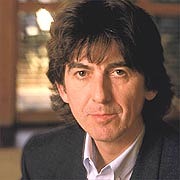 We’ll leave the last word to the professionals over at Liverpool’s “Hard Day’s Night” hotel bar, BarFour. They came up with a whole raft more. One is the “Hari Krishmas,” which sounds yummy enough for teetotal me to contemplate a sip, and so blasphemous George might have actually laughed:

Shake all ingredients over ice. Strain into a brandy glass and garnish with grated nutmeg.