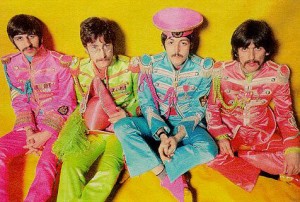 The original Mad Men. Look at that hat, for example; that’s MAD.

Did Matthew Weiner follow the structure of Sgt. Pepper’s Lonely Hearts Club Band in the recently-completed fifth season of “Mad Men”? Yi! News site contributor Emily Viviani thinks so, and has developed this thesis over three posts, the first of which you can read here.

Thanks go to commenter Craig for drawing the attention of Hey Dullblog to her pieces. — Nancy Carr

Some of the parallels Viviani draws are interesting (“At the Codfish Ball” as a take on “Being for the Benefit of Mr. Kite!”, for example), whether or not you buy them as intentional. Overall, the similarities fail to convince me that this season of “Mad Men” deliberately mirrored the album. But they do strengthen my convictions that “Sgt. Pepper’s” themes are universal and that the album is much darker than it’s often considered to be.

The link I’d make between this season of “Mad Men” and “Sgt. Pepper’s” is larger and much less tied to episode specifics. At the end of season five the folks at Sterling Cooper Draper Pryce are experiencing heady success, with the question being where they can go from here. And that’s the same question the Beatles confronted after “Revolver”: where do you go after you go straight up? 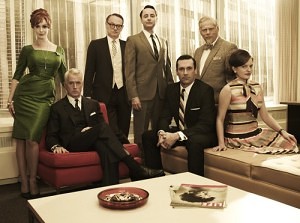 The act you’ve known for all these (five) years

The beginning of the end?

The Beatles re-presented themselves as Sgt. Pepper’s Lonely Hearts Club Band just as the group’s seams began to show. It’s an album by a well-established band (“the act you’ve known for all these years”) that is beginning to wonder, however tentatively, if its best times are behind it. Sgt. Pepper’s band is portrayed as a revival act: they learned to play “20 years ago today.”

In retrospect, “Pepper” was the beginning of the end for the Beatles, however brightly things shone at the time. It’s looking to me as if the same will be true for Sterling Cooper Draper Pryce.

At the end of this season the firm is on its way up — literally — but I got a bad feeling about the direction things were heading. Similarly, “Pepper” brought the Beatles an unprecedented level of acclaim, but it exposed and widened a crack in the band’s foundation. The Lennon/McCartney partnership was starting to fracture at the time of “Pepper,” and McCartney begins to dominate as he didn’t earlier. That’s true not only of his songwriting but also of his playing: on “Pepper” the bass is more prominent than before, consistently showcasing McCartney’s accomplished playing. And the album’s concept was McCartney’s idea: for the first time, Lennon is not leading (or co-leading, as he was on “Revolver” and maybe “Rubber Soul”), but following.

From comments Lennon made in interviews over the years, it’s clear that the lavish praise the album received got under his skin. Post-“Pepper’s,” Lennon withdrew from his leadership role, and once that happened, the band was doomed (in my opinion). It was only a matter of time before Lennon decided he wanted out.

It’s hard to hold a group of talented, willful people together over the long haul and have them all working towards the same goal. People change. Eras end. Destructive patterns repeat. Recriminations and regrets fester. Just a few years after the triumph of “Pepper’s,” the Beatles broke up. That they managed to create “Magical Mystery Tour,” “The Beatles,” “Let It Be,” and “Abbey Road” in their remaining years is something of a miracle. The acrimonious, protracted end of the Beatles is something I don’t think any of the members ever fully recovered from.

At the end of “Mad Men,” season five, things look as superficially bright for the agency as they looked for the Beatles in the afterglow of “Sgt. Pepper’s.” The attention and money is rolling in, and it seems like a good time to expand (take on an additional floor of office space, if you’re CSDP; start Apple, if you’re the Beatles). But it’s a good bet that that expansion is the beginning of the end. Because nothing tests a group’s structural soundness like success.