NANCY CARR * The Beatles broke up over 40 years ago, but in the public’s mind they could never really stop being Beatles. The desperate efforts of all the band’s members (well, except Ringo) in the 1970s to escape its gravitational pull were doomed. If you want to see this reality in action today, check out the displays in a nearby record store—assuming you’re near one that’s survived. There’s a good chance that everything Beatles related will be shelved together.

One of my favorite local shops, Oak Park Records, is owned by Alan Heffelfinger, who’s particularly knowledgeable about music (he worked for EMI distribution before opening his store, and writes and plays music himself). So a few days ago I asked him something I’d been wondering, Beatles freak and record geek that I am, for some time: in his bins, why do solo records by Paul, John, George and Ringo follow the Beatles section? 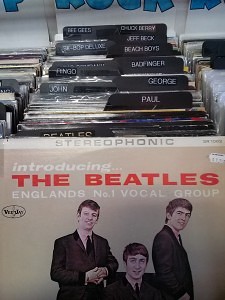 John: “I can’t believe we’re STILL STUCK TOGETHER!”
Ringo: “It’s not so bad, really.”
George: “Hey, at least Paul’s not hogging the spotlight in this picture.”

“Not a lot of people come in looking specifically for a John or Paul album,” Alan said.  “They’ll come in thinking ‘I’m going to look at the Beatles stuff, and at some solo stuff.’ It’s really a matter of convenience. Being in the Beatles defined them. It’s like Elijah Wood playing Frodo in the Lord of the Rings movies, or Henry Winkler playing the Fonz. It doesn’t matter what else they do, they’ll always be known for those roles. No matter what John, Paul, George, or Ringo did, they were always one of the Beatles.”

In other words, John’s insistence that he didn’t believe in the Beatles, Paul’s inclusion of the infamous copulating-beetles picture on the back of “Ram,” and George’s insistence that the Beatles experience was a bummer weren’t enough to keep them apart in (what remains of) the music-buying crowd.

“The Beatles” as a black hole with a extensive event horizon

This tendency of “The Beatles” as a category to pull its former members back in extends well beyond them. Often the “John Lennon” section includes Yoko Ono, Julian Lennon, and Sean Lennon. I’ve seen it rope in Harry Nilsson’s Pussy Cats (which Lennon produced), and David Peel’s Bring Back the Beatles. The “Paul McCartney” section virtually always includes the Fireman and all manifestations of Wings, along with an occasional Mike McGear or Denny Laine solo album.  As for the “George Harrison” section, I’ve seen it include Ravi Shankar, The Concert for Bangladesh, the album Goddess of Fortune, and sometimes The Traveling Wilburys.

And that’s not even getting into all the “Beatles-related” albums that can show up in the bin: the Hollyridge Strings’ myriad cover albums, Beatlemania exploitation records like the Buggs’ Beetle Beat and Murray the K’s The Fifth Beatle Gives You Their Favorite Golden Gassers.

I suspect that most shop owners, if asked about the reasons for this lumping together, would give an answer like Alan’s: the Beatles are such a big draw that if you’re a musician who gets close to them, you’ll be defined by that association, at least commercially.

You can sell the Beatles’ work all of the time, the solo work some of the time

When I asked Alan how sales of Beatles records compare to what they were ten years ago, he said “They’ve always sold like crazy.” He added that while the vinyl reissues are popular, especially among kids just getting into the Beatles, “the collectors want the originals. Even the 1980s issues are becoming more popular. We’re celebrating 50 years of the Beatles, so a lot of people would rather have something that reflects that time than something new.”

The Beatles new albums that sell most readily are (no surprises here) Abbey Road, Rubber Soul, Revolver, and Sgt. Pepper’s.

The solo work doesn’t sell nearly as much. Alan said McCartney’s work probably sells the most in this category, but that may be because there’s more on offer. That’s also the reason for the un-iconic “Paul, John, George, and Ringo” order of the solo work. “Since Paul has the biggest solo catalog, he’s first because it looks better to have more records after the Beatles section.”

But the solo album Alan gets the most requests for is All Things Must Pass. Plastic Ono Band, Imagine, and Band on the Run are all fairly reliable movers. Interest in Ram has picked up in the past few years, as that album has gotten more critical attention. Alan remarked rather sadly that “Ringo doesn’t sell, but the Ringo album is one of the best Beatles solo records. It’s really an all-star cast.”

Picking favorites in the solo catalog 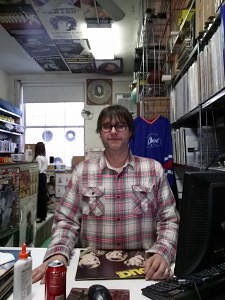 The solo album Alan listens to most is All Things Must Pass. “I enjoy most of George’s stuff, except for Gone Troppo. For John, I love Mind Games and Walls and Bridges, maybe because I’ve heard them less. I think of stuff like “Freda People (Bring on the Lucie)”—there’s a lot of good songs that didn’t get much attention.

“I listened to Wings Over America a lot as a kid—partly it was just fascinating to be able to fold the sleeve out and have three records plus posters! But it’s also musically cool. I still enjoy it. With Paul, my enjoyment of him has gone up over the years. My daughters [ages 10 and 8] love him, so I’ve been listening to him a lot. Even something like Press to Play I’ll listen to and think ‘Man, why are people dogging on this album? Half these songs are good!’ Paul’s kind of like the new Gershwin: he writes classic songs. Some of them are cheesy, but they’re damn good songs.”

Leaving the store, I look again at the Beatles section and wonder what John, Paul, George and Ringo would say about being shelfmates for eternity. At least Paul and Ringo have had time to broker a peace with the band’s legacy; Paul, in particular, clearly relishes doing live performances of Beatles songs that were purely studio creations. I’d like to think that even John and George would see this bin-sharing situation less as an aggravation and more as a testament to just how enduring their work with their bandmates has proven.