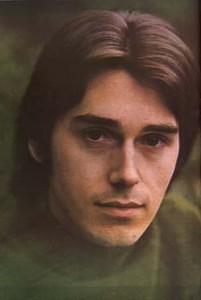 Emitt Rhodes, four musicians in one.

“I hate those guys [The Beatles]! They ruined my life!”—Emitt Rhodes

For a while I’d heard about Emitt Rhodes, famously called “the one man Beatles,” but I’d never actually heard him. So I gave a listen and (unsurprisingly) liked it enough to share.

Rhodes’ career is a fairly standard Sixties story: guy forms a band with some buddies; gigs around for a couple years; is spotted by an A&R man and given a contract; records an LP which, while good, doesn’t catch fire; then struggles to fulfill his contract in a business more interested in the bottom line than in art. (Oh, and there are some managerial rip-offs in there, too.)

A lot of my recent natterings on this site—from my reverence for Brian Epstein, to my sad head-shaking at John Lennon’s behavior post-India—come down to this: talent is only one part of what brings great art to a mass audience. And it’s an even smaller part of what keeps an artist clothed and fed. Success requires lots and lots of happy circumstances, and when everything’s working, it’s nothing short of a miracle.

To undervalue any one of these moving parts, or worse yet, purposely sabotage the mechanism, strikes me as self-centered and ungracious, in the way that children can be. When I hear John and George bitch about the fans, or fans gripe about Epstein’s botching Seltaeb, I think, “You have no idea how bad it can be. You can write great music and not get famous; or write a #1 and not get paid (I have my own stories about that); or lose your rights through a swindle; or, because you’re too poor to defend yourself, just get robbed (again, happened to me)—which keeps you too poor to defend yourself.”

The Beatles story isn’t just about winning the Irish Sweepstakes, it’s about winning them every six months from 1963-1967…then getting bored with the guys you pick the numbers with. To listen to John Lennon talk about being miserable in 1967, and then compare it to what could’ve happened to him—that “playing Vegas” was the worst thing he could imagine shows just how protected and fortunate he’d been.

So when I listen to The Beatles, I also try to hear (with my “third ear”!) all the might-have-beens and almost-weres and one-hit-wonders and industry casualties. When it works out—when everything works out—it’s precious. And when it works out, I’ve always felt you kinda owe it to all the near-misses to produce as much good work as you can, for as long as you can.

There’s a documentary about Emitt, which I haven’t seen but I suspect Devin has. The trailer is below—should I seek it out? There’s also a nice ER appreciation on this page; and a great Record Collector article linked from this page. If there are better Web resources, suggest ’em, and I’ll add them to this post. (BTW, I’m listening to the stuff on the Willard’s Wormholes page linked above, and Jesus Christ what great pop songs.)