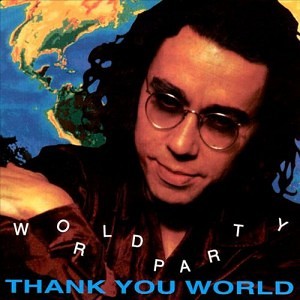 DEVIN McKINNEY  •  Last week, my wife and I had the pleasure of seeing World Party perform at City Winery in Manhattan. World Party is Karl Wallinger, singer-songwriter and multi-instrumentalist who has been making music on and off since the late ‘70s, first with The Waterboys and then on his own. For the last few years he’s been performing in America and England, usually accompanied by fiddler-mandolinist Dave Duffy and guitarist John Turnbull. He’s one of my favorite musicians ever, not just Beatles-influenced but Beatles-besotted, and I really don’t know why it’s taken me so long to extol his work on this site for the benefit of the very fans who would be most likely to go wild for it.

For background and context, you can read things I’ve written on Wallinger here and here, but suffice to say that he is steeped in ‘60s-‘70s pop, mostly Beatles but also Stones, Beach Boys, Motown, Dylan, Sly and Funkadelic, with generous injections of country, folk rock, psychedelia, Spectorsound, and other appealing substances; if you have a feel for anything on that list, it will be gratified. Wallinger’s world (party) view is liberal, but not lamebrained; environmental, but with a deep love of electricity; funny and playful, but with a sense of the stakes involved in living through these years, these very fraught moments of cosmic time.

If you’ve never heard of Wallinger, don’t feel bad. Too few people have. His only chart impact came long ago, in the form of 1986’s “Ship of Fools” and 1990’s “Way Down Now”; his masterpiece LP is probably Goodbye Jumbo (1990), with the older-but-wiser-but-equally-tuneful Dumbing Up (2000, revised version 2006) a close second. With the sole exception of his first, Private Revolution, none of his albums is less than great. Some go past inspired into incandescent. None has ever made any rag or mag’s list of the Top 700 Anythings of All Time. But within those albums—and the many, many extended-play singles, bootlegs, soundtrack adds, etc. that augment them—lie rich lands and rolling horizons of song, tune, voice, love, anger, damnation, liberation. Basically, everything a reasonable person could ever want from popular music.

Over the years, Karl has covered a whole clutch of Beatles songs, among which number “Penny Lane”; “The Long and Winding Road” (a lo-fi demo done in the disco style of ’77 Bee Gees); “A World without Love” (heartbreaking, if you can imagine); “Happiness Is a Warm Gun”; John’s “#9 Dream”; Paul’s “Man We Was Lonely” (for the 2001 McCartney tribute LP Listen to What the Man Said); “All You Need Is Love”; “Martha My Dear”; and “Nowhere Man.” (Clearly he favors the mid- to late-period Beatles.) Some of these have been mere studio gags, dot-for-dot recreations on the order of Todd Rundgren’s Faithful covers; but even the most meticulous have something slightly off, some jaunty thumbprint or imposition of impishness, pure manifestation of irrepressible personality—which personality, more than anything save talent, prevents Karl Wallinger from ever being dismissible as a mere replicator. And when his instinct for the tribute is kissed by the sun, the result is gold from the sky: Karl last year issued a box set, Arkeology, with a previously unheard version of “Dear Prudence” so sublime to my ears I can’t describe it.

If I sound like I’m on a mission, spreading a word, it’s because I am. If I sound like I’m overselling this man’s brilliance, I’m not. Last week’s concert was the third of Karl’s we’ve seen over the past seven years, and we agreed that it was not only the best by far, but that it blew the others away. Despite his near-death experience—read my bits above for that story—Karl Wallinger is only getting stronger. But just because he’ll be with us a while longer doesn’t mean you should waste another minute on not digging him.

Get into World Party. That’s an order.