Todd Rundgren and his spat with Lennon came up in the comments thread on the “Ah, Girl” post — I wasn’t aware of it until Devin pointed it out. [Particulars here: http://trconnection.com/trconn.php/article=lennon.art#lennon]. The tenor of this interchange doesn’t surprise me much, and brings into focus my sense of Rundgren’s animosity toward the Beatles. Rundgren seems to have a clear case of what Harold Bloom would call “anxiety of influence” where the Beatles are concerned. That is, Rundgren knows both that he’s influenced by them and that he can’t play in their league musically, and resents that.

His references to the Beatles feel particularly pointed. Rundgren’s first group, “Nazz,” released a debut album in 1968 whose cover is an obvious take on “Meet the Beatles”: 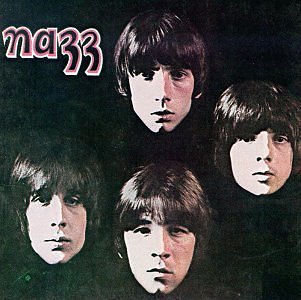 In 1980 Rundgren’s group Utopia released “Deface the Music,” the cover of which is another take on “Meet the Beatles,” this time featuring songs satirizing the Beatles’ musical styles and lyrical content: 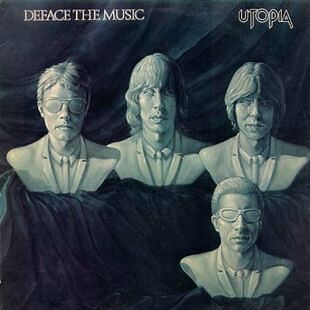 Rundgren can write clever satire, no question. “I Just Want to Touch You” is an amusing take on the moptop-era Beatles, while “Everyone Else Is Wrong” skewers Lennon’s occasional righter-than-thou rhetoric in his songs. “Hoi Polloi” skillfully makes fun of McCartney’s songs about everyday life and people. Yet I don’t go back to “Deface the Music” much, because its satire leaves a sour taste—unlike “The Rutles,” which is funnier and more generous of spirit.

Rundgren’s situation—indebted to the Beatles musically, not able to be as good as they were—is a lot like Oasis’. But Oasis seemed less bitter about it.

I’m indifferent to most of Rundgren’s music, including the two albums most often cited as his best. “Something / Anything?” (1972) has me answering “No, not really.” I’m willing to concede that “A Wizard, a True Star” (1973) is technically dazzling, but there’s nothing on it I much want to listen to again. (And that title! This guy wants to smack Lennon for being full of himself? Puh-leese.) And the Rundgren song I hear most on the radio, 1972’s “Hello, It’s Me,” sounds to me like a competent imitation of a second-rate McCartney ballad.

Am I being too harsh? I’d love to know what others think of Rundgren, his music, and his attitude toward the Beatles.