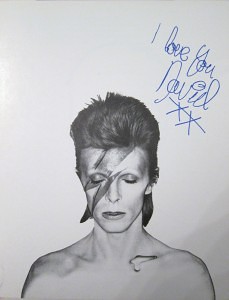 Love you, too, Dave.

Impossible, folks, to let a full Earth’s rotation pass without a post on the late, great David Bowie. Bowie has always seemed to me to be a performer whose rise to fame would’ve been impossible without the Beatles coming first, preparing the way. The seven years of Fabdom were essential in priming the audience for what Bowie was and wanted to be, and where he would lead them.

As Keith Richards said about the Stones, there’d be no Bowie without the Beatles. And I don’t think it’s a coincidence that Bowie blew up after it was clear the Fabs were gone and weren’t coming back — not that Bowie fans were simply dejected Beatles fans, even in 1972, but that he filled a gap, in some ineffable sense, that the Beatles had left. Certainly he took the intellectual license that they had wrested from high culture, and built upon that in ways they couldn’t do as solo artists. Now, if the Beatles had remained intact in the Seventies, they would’ve likely done some of the work that fell to Bowie — the melding of music and fashion and politics which began in earnest with Sgt. Pepper — not just rock as lifestyle, but rock as proto-religion. Bowie’s bisexuality wasn’t just a stunt, it was an attempt to continue what the Beatles had started, the remaking of the male world that had been launched by “pudding-basin haircuts.” As solo artists, only Lennon was willing to look at life as one long performance. Bowie was a natural outgrowth of late-Beatles Lennon, and that’s why the pair got along so well. Bowie is what Lennon would’ve become in a world without Yoko, if his nervous system could’ve held up under the inevitable assault of drugs. (Bowie’s nearly didn’t, and Lennon had ten years’ head start.)

Bowie was sui generis, for sure, but how he was weird had something to do with what the Beatles had done before. If Lennon was an old-style prophet, with a long beard and white clothes, looking around at the way things were going and guessing (correctly) they’d crucify him, Bowie was a holy man for the age of Apollo, a Starman waiting in the skies, who’d like to come and meet us but he knows he’ll blow our minds. There’s no Bob Dylan in Bowie’s personas. And, though he and Jagger were pals, Bowie has just as little to do with the Stones and that whole blues-rock tradition. Bowie’s art-school rock, inflated by late Beatles lifestyle.

Ziggy Stardust may or may not be based on Paul, but conceptually he was the inevitable consequence of McCartney’s Pepper brainstorm: stardom as disguise, disguise as refuge from stardom. Similarly, Bowie’s genderbending — so tame-seeming today — was the obvious next step in pop sexuality, after John Lennon literally took his trousers off in public. After such overt heterosexuality — “this is me and the missus in the altogether” — where to go for the sexual shock which was the lifeblood of rock ‘n’ roll? Bi- and male homosexuality.

In the moments before I began this post, I had a thought: Bowie is a wonderful mix of John Lennon, Paul McCartney, and of John&Paul. He has Lennon’s art school sensibility, chameleon-like public nature, appetite for excess, and propensity to shock. He has McCartney’s love of collaboration, musical restlessness, and productivity. And he makes overt the sexual charge between John and Paul; when he dances onstage, a jerky, whiteboy dance, he is John if John were less inhibited, and Paul if he took himself a little less seriously. He is John&Paul funky — earthy, sexy.

How dare David Bowie die, and leave the rest of us to contend with Trump and Twitter on our own? How dare the life I knew as a child ebb away, person by person, piece by piece, until I’m consigned to live in a shadowy cold land of harsh noise and commerce? The world without David Bowie in it — what a preposterous notion. How offensive. We are left only with a mocking empty space, and memories — though whether to curse them or thank God for them, I cannot say.

But I won’t leave you on such a down note. Here’s what David Bowie had to say about our own John Lennon, whom he called ‘my greatest mentor.’ According to Beatles Archive (and h/t to them!), it’s from a speech David Bowie gave to the Berklee College of Music’s Class of 1999:

“It’s impossible for me to talk about popular music without mentioning probably my greatest mentor, John Lennon. I guess he defined for me, at any rate, how one could twist and turn the fabric of pop and imbue it with elements from other artforms, often producing something extremely beautiful, very powerful and imbued with strangeness. Also, uninvited, John would wax on endlessly about any topic under the sun and was over-endowed with opinions. I immediately felt empathy with that. Whenever the two of us got together it started to resemble Beavis and Butthead on “Crossfire.”
The seductive thing about John was his sense of humor. Surrealistically enough, we were first introduced in about 1974 by Elizabeth Taylor. Miss Taylor had been trying to get me to make a movie with her. It involved going to Russia and wearing something red, gold and diaphanous. Not terribly encouraging, really. I can’t remember what it was called — it wasn’t On the Waterfront, anyway, I know that.
We were in LA, and one night she had a party to which both John and I had been invited. I think we were polite with each other, in that kind of older-younger way. Although there were only a few years between us, in rock and roll that’s a generation, you know? Oh boy, is it ever.
So John was sort of [in Liverpool accent] “Oh, here comes another new one.” And I was sort of, “It’s John Lennon! I don’t know what to say. Don’t mention the Beatles, you’ll look really stupid.”
And he said, “Hello, Dave.” And I said, “I’ve got everything you’ve made — except the Beatles.”

A couple of nights later we found ourselves backstage at the Grammys where I had to present “the thing” to Aretha Franklin. Before the show I’d been telling John that I didn’t think America really got what I did, that I was misunderstood. Remember that I was in my 20s and out of my head.
So the big moment came and I ripped open the envelope and announced, “The winner is Aretha Franklin.” Aretha steps forward, and with not so much as a glance in my direction, snatches the trophy out of my hands and says, “Thank you everybody. I’m so happy I could even kiss David Bowie.” Which she didn’t! And she promptly spun around swanned off stage right. So I slunk off stage left.
And John bounds over and gives me a theatrical kiss and a hug and says “See, Dave. America loves ya.”
We pretty much got on like a house on fire after that.
He once famously described glam rock as just rock and roll with lipstick on. He was wrong of course, but it was very funny.

Towards the end of the 70s, a group of us went off to Hong Kong on a holiday and John was in, sort of, house-husband mode and wanted to show Sean the world. And during one of our expeditions on the back streets a kid comes running up to him and says, “Are you John Lennon?” And he said, “No but I wish I had his money.” Which I promptly stole for myself.
[imitating a fan] “Are you David Bowie?”
No, but I wish I had his money.
It’s brilliant. It was such a wonderful thing to say. The kid said, “Oh, sorry. Of course you aren’t,” and ran off. I thought, “This is the most effective device I’ve heard.”

I was back in New York a couple of months later in Soho, downtown, and a voice pipes up in my ear, “Are you David Bowie?” And I said, “No, but I wish I had his money.”
“You lying bastard. You wish you had my money.” It was John Lennon.