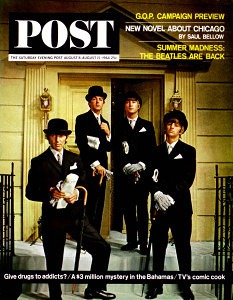 Saturday Evening Post, August 15, 1964. Beatles as City gents; two British stereotypes for the price of one!

Over the past several months there’s been a topic in the wind here on Dullblog — no, not just Beatle-boinking — but the impact of class on the Beatles story. We’ve talked about it might’ve shaped their relationships with each other (particularly John being, or considering himself, just a little bit posher than the other three). And we’ve noted how it is almost never mentioned, particularly by American authors. But given their time and place, class was as much a part of the Beatles’ story as…well, all those amazing “middle eights” for example.

“It’s not only the timing of his death and the fact that he too was 69 that links him to David Bowie. Both were working class kids from council estates who went to art school where they gained enough confidence in their own creativity that they were able to go on to find fame and fortune. Is it still possible for working class kids to realize their potential in such a way? The art schools are almost gone; those that survive now charge a fortune. The social mobility that Rickman and Bowie experienced is increasingly stifled.”

So what roles do you think class played in the Beatles’ story? Discuss in the comments — and let’s get a good one going here, folks. And if UK commenters can help us Yanks decode, please do.