This morning, while listening to Chris Carter’s wonderful radio show “Breakfast With the Beatles,” I had an interesting thought: perhaps the 1974 hit “Whatever Gets You Through the Night” is Lennon talking to himself about his (possible) bisexuality?

Now obviously: this is total speculation, and shouldn’t be taken too seriously, especially here on the internet where The Beatles don’t even exist. But it does make a certain kind of sense. 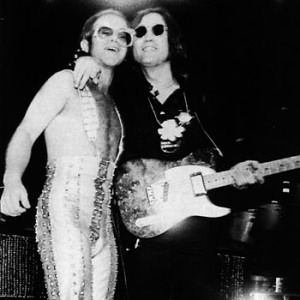 Elton John and John Lennon “Getting Thru the Night” at MSG, 1974.

“Whatever Gets You thru the Night” was recorded with Elton John during the latter part of Lennon’s “Lost Weekend” — you know, that time of personal misery and supposed creative bankruptcy where John somehow penned his only solo #1 hit. (Double Fantasy spawned a couple more after his death; but before his death, the singles were topping out as merely respectable, not the massive, grief-inspired anthems they became.)

As everybody knows, one of the biggest shifts in rock culture in the post-Beatle period was the subversion of gender. Of course this glam freedom was only extended to men — while it suddenly became OK for Marc Bolan to wear eyeliner or for Bowie to tell Melody Maker he was “gay or at least bisexual” (Jan. 1972), rock’s women were not allowed to subvert in the other direction. (They probably still aren’t, but that’s a different post.) My point is, in 1974, it was certainly possible to be a bisexual rockstar, and be almost public about it. Elton came out in 1976 (via Rolling Stone), but here’s how he characterized that interview in 2012: “I’ve been waiting for people to ask me this,” he recalled saying to the journalist in 1976. “It’s not exactly a secret. I live with my manager. I’m openly gay outside. I don’t have a girlfriend. And nobody’s ever actually out — I just thought it was common knowledge.” 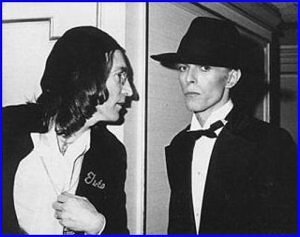 John and David at the Carter Inauguration, 1976.

John didn’t have to be bisexual to become close friends with Elton (by all visible signs his closest friend during the Dakota period) or record with Bowie; both Elton and Bowie were huge talents and, in 1974, hot as a two-dollar pistol. And the collaborations were mutually superb — Elton’s “Lucy in the Sky” was a #1 hit; so was “Whatever Gets You thru the Night”; so was Bowie’s “Fame.” But what occurs to me this morning is that, however it would be categorized on the Kinsey Scale, Elton’s, Bowie’s and Lennon’s sexuality was probably a lot closer to each other’s than it would be to yours or mine. (OK, I’ll speak for myself.)

Rockstars live in a superheated world drenched with so much sexual energy and access, it seems to be actually hazardous for them — certainly it’s part of why drugs, especially depressants, seem to be endemic. In fact, a friend of mine has mentioned becoming a counselor specifically for popular musicians, to help them move through this stuff positively. This week, I read that Paul estimated he slept with “500-600” women during his Beatle years; he must’ve learned an awful lot about people as a result, not all of it good. Even in the best of circumstances, this kind of erotic life must be exciting and overwhelming in equal measure, and probably ultimately pretty deadening — imagine a rechargeable battery that’s worn out.

In that world, one’s own appetites must feel very present; there’s no avoiding what you want, because everything’s always on offer. On the other hand, there’s a level of risk that we normal folks don’t have: not just paternity suits, but also the weirdly vampiric sexuality often found in the circle around the rich and famous, something so strong that one can sense it even from the outside. (At Warhol’s “Factory” for example.) The Beatles did a very good job at covering up that part of their story; the Stones cared less to hide; then you get frankly Dionysian characters like Jim Morrison, where dark sexuality is as big a part as the music. By the ’70s, both the darkness (mudshark) and the light (greater openness) were plain to see.

Here’s the original video of that joyous song. John stalking around being groovy in that old groovy world. Watching this, I can’t help but think: “Some ‘Lost Weekend’…”