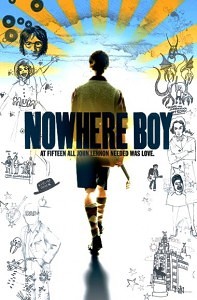 If you love The Beatles, the idea of a movie based on John Lennon’s teenage years is guaranteed to cause mild discomfort, as your leaping heart presses against your rising gorge. (Of course, we all agree that a comedy/mystery based on Lennon’s later life is completely OK. By the way, thanks to the hundreds of people who downloaded Life After Death for Beginners yesterday. I hope you all enjoy it.) Faced with Nowhere Boy then, the logical left-brain is definite: “The world does not need John-Julia slash.” At the same moment, however, your right hemisphere is screaming, “I GOTTA SEE THIS.”

Well. I saw the West Coast premiere of Nowhere Boy last night, and YOU GOTTA SEE THIS.

A Nowhere Boy review? But of course

First, the casting is superb—Aaron Johnson is completely believable as the young Lennon. Let me say that again, because for me it was like winning the Irish Sweepstakes: you absolutely believe that this is what the 16-year-old John Lennon was like. Smart, but wide-eyed; more bluff than tough; tender and violent and completely confused about which is right when; and saddest of all, utterly unequipped by his time and place to deal with any strong emotion. Nowhere Boy‘s Lennon is a kid ready to explode, and whether in a good way or a bad one, is completely up to Fate. Lennon himself often mused about what might’ve happened to him if not for The Beatles. Prison or the army were his guesses, and Johnson’s characterization shows that. The young actor’s features, accent, mannerisms—really good. As you might expect, the whole movie hangs on his performance. Fortunately, it’s superb.

Kristin Scott-Thomas isn’t given much to do—“Okay, for this take, read angrier“—but she’s rock-solid as Mimi, the brittle battleaxe with the heart of gold (or at least plating). Even more important is Anne Marie Duff’s Julia. The high-strung, divided character could’ve easily been unsympathetic, but she pulls it off with a sort of blowzy intensity that rings true with the facts of Julia’s life. Relatives often talk about how magnetic Julia was, how attractive, how talented—but then we look at her life and see one catastrophic decision after another. Nowhere Boy hints at Julia’s probable manic-depression, something that Lennon almost certainly suffered from himself. Certainly he inherited Julia’s talent for emotional car crashes, along with her charisma.

Like his brain chemistry, the circumstances of Lennon’s childhood—the mixture of abandonment and helicopter parenting, repression and license, truth and lies—are the key to understanding him as an artist, and a person. Ignoring this stuff because it’s unprovable, unpleasant, or both, is the reason so much of what’s been written about Lennon feels like gussied-up PR. In the case of semi-authorized biographers Ray Coleman and Philip Norman, I chalk it up to British reserve—products of a certain age, these guys seem to wish not to pry. And so we’re left with respectful portraits that feel airbrushed at best, and at worst actually retard our understanding of the man. There was a time to respect John Lennon’s privacy, and it was called “when he was alive.” We cannot expiate Mark David Chapman by airbrushing his victim. Now is the time where we must try to understand Lennon, now before the primary sources die, and his world becomes forever locked in history. This may discomfit his widow—who was also raised in complicated circumstances on an emotionally restrained, class-ridden island—but it is nevertheless the case.

One cannot make sense of Lennon’s ability to encompass opposites (the political activist who didn’t vote until 1968, or the pop genius who thought The Beatles should put out “Revolution #9” as a single, or the devoted househusband who smacked Yoko and yelled in Sean’s ear so loud they had to take him to the ER), none of this makes sense without investigating his psychology. That is, his childhood. As the Jesuits say (or was it the Hitler Youth?), “Give me the child until seven, and I will give you the man.”

American writers on Lennon, drenched as they are in our culture of TMI, generally do better at getting inside his head. Albert Goldman’s Lennon is a tormented demon, but also someone with the ruthlessness, self-preservation, and drive that it took to make The Beatles happen, and then survive once they had. Unfortunately, Goldman lacks sympathy towards his subject, and so in the end his Lennon remains a puppet, or at best, a cartoon. It takes compassion to delve into someone’s mental state. (That’s why therapists rarely punch their patients.)

Something British, That Feels American

Sympathetic but unflinching, Nowhere Boy is a very British attempt at Lennon that feels very American, and because it pulls off this balance, it will give Beatle fans a really precious gift: a “John Lennon” that actually makes sense. The screenplay was written by Matt Greenhalgh who wrote the Ian Curtis biopic Control. The details of Northern life in the straightened 40s and 50s are sketched flavorfully but not overstated. For a special occasion, Julia makes vanilla buns; she serves exactly four of them, each no bigger than a half-dollar, one for each child plus herself. Message received: sugar rationing ended in ’53, but three years later, money’s still tight. In Nowhere Boy, houses are dark, and small. People walk, or bike, or ride the bus. Clothes are wool. It’s no wonder Lennon’s generation idolized America, and once they’d conquered the world, made the Sixties happen as they did. What is Swinging London but the reverse of Liverpool ten years’ before? 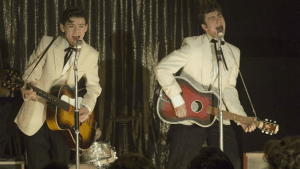 Nowhere Boy’s version of John and Paul rock out as The Quarrymen. Amazingly, it works.

There were certain aspects of the film that rang a bit false. The Oedipal nature of John and Julia’s relationship is, uh, right out there in a way that seemed like a convenience of the screenplay. The mother-as-lover meme was encouraged by John’s late-70s tape describing how he wanted to feel his mother’s tit, and that she probably would’ve let him. But Lennon also remarked on many occasions about how physically repressed his upbringing was, how it took until the 70s for him to realize “touching is good.” (This from a man who had more groupies than I’ve had hot dinners.) All of this is to say, the scenes where John and Julia were cuddly seemed like a sop to the modern sensibility.

So too the blue language, which to the modern ear is necessary to connote “teenage rebel.” Rebellious teenagers circa 1956 Liverpool were different than ours today; next time you watch Rebel Without a Cause, for example, notice how well-behaved all the kids seem. One of the most profound legacies of The Beatles generation was a great opening-up, emotionally speaking—a shift from reserve and repression to extroversion and sharing so decisive that now, anything but that strikes us as unreal. Nowhere Boy’s Lennon uses the f-word with Mimi, and I don’t think that happened in 1957. In fact, I don’t think the 40-year-old Lennon would’ve sworn at Mimi. That’s not the kind of man he was, and forgetting that turns him into one of us—ie, a creature of the world he helped create. That’s incorrect. As a boy, John Lennon hated school, but as a man, he slept with a picture of Quarrybank over his bed. His last New Year’s Eve, he wore his old Quarrybank tie; one, he still had it, and two, he liked it. Avatar of the new era, Lennon was quite literally old-school, and we should remember that.

Mimi, too, is made to “come around” regarding John’s choice of career in a way that, while it makes her more appealing to modern audiences, isn’t really supported by the historical record. In Nowhere Boy, for example, she’s seen smiling approvingly at John during the famous Woolton fete, when in reality she “watched [John] cavorting around… I wasn’t amused…I wanted to pull him offstage by his ear.” (Thanks @thedailybeatle.) By making Mimi support Lennon’s music, the movie avoids that eternal Beatlefan question, “Why the heck does he love her?”

That I found myself expecting this degree of accuracy is a credit to the overall verisimilitude of Nowhere Boy. I saw the care they took with it, and you will, too, so even if you don’t like it as much as I did, you’ll admire the movie as something worthy of the real people it is based upon. I was genuinely moved during the scene when all the family laundry is aired, once and for all.

A Liverpudlian transplanted to New York, by the time he died, John Lennon was a Mid-Atlantic Man. He is the patron saint of the coming together of British and American culture which started with The Beatles and has gathered steam ever since. From where I’m sitting, I could get a Cadbury Flake bar in five minutes. I’d pay for it with money I made transforming a very British children’s book in a very American way. Your life might not be as Mid-Atlantic as mine, but you can certainly flip on BBC America—or if you’re in the UK, buy a Snickers bar, or watch “30 Rock” on Hulu. Nowhere Boy embraces this cultural melding, which is probably why it feels so accurate. John Lennon could get a Flake bar five minutes from where he lived. And he’d pay for it using money he made transforming a very American music in a very English way.

I was visiting Oxford the night Diana was killed, and for the week after that. The way people mourned, what they did and said, and the way the mass-media shaped all of it (from the wall-to-wall TV coverage to Elton John singing “Candle in the Wind”) struck me as, well, American. I didn’t expect British people to leave stuffed animals and say they felt as if they knew her personally; and I doubt anybody older than John Lennon’s era would’ve said that. American emotionality and egalitarianism is new in UK culture, and John Lennon did as much as anyone to create that. In 1980, when John Lennon died, Britain and America mourned differently; in 1997, they really didn’t.

Whatever one thinks about this change—whether it’s a good thing, a bad one, or somewhere in between—it allowed Nowhere Boy to succeed in a new way. The movie feels both thoroughly British, and emotionally aware. It gets both the facts and the feelings 99% right. That’s a great thing, and augurs very well for future Beatle media. YOU GOTTA SEE IT.