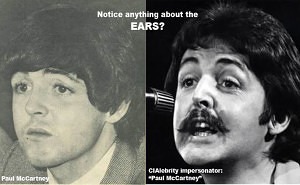 This morning, I received the following email:

Hello, I’m Tatiana. I’m doing a project.. my class got to pick from 41 different topics and I chose one about “Faul McCartney.” I was wondering if you had any information/ clues about this topic? If so could you email me back ASAP? Thank you very much!

Who says doing a Beatles blog is all arguments about heroin and Yoko?

I sent Tatiana to the Wikipedia for “Paul Is Dead.” Is there anything more to the contemporary theory? How else can we help this youth? Besides reassuring her that Paul is indeed alive, which she might not believe because THEY’VE GOTTEN TO US, TOO

Of course none of you believe that Paul is dead…but anybody believe it as a kid?

The best, bar-none, discussion of this issue and the psychological murk surrounding it is our own Devin McKinney in Magic Circles, which every reader of this blog is heartily encouraged to read. I attempted to cut and paste an excerpt of the relevant section here, but Google wouldn’t let me. (“Information wants to be free,” but apparently not THAT free.) Go read that book!

Those McCartney e-tickets may be stolen

Just wanted to bring this to readers’ attention…