Lester Bangs on the Beatles 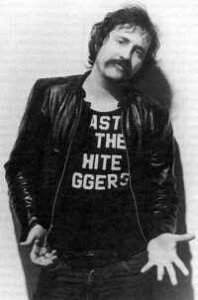 “Uncool” is just another type of cool, Lester.

Oliver Hall over at the amazing website Dangerous Minds surfaced this contentious clip by ur-rock nerd Lester Bangs dismissing Beatles nostalgia as “sick” and “a rip-off,” a mind-killing corporate shill whose ultimate victims were “the consumer” and (gulp) “John Lennon.”

This explosion of insight comes from a TV series called “FM-TV,” which did a segment on Beatles nostalgia. The entire annoying segment is below. Right up front I’m going to cop to taking this personally, being one of those second-generation fans that, in Lester’s eyes, should’ve lined up to see — I don’t know, Lydia Lunch? The Voidoids? Apparently there was only one right way to be a teenager in 1982, according to this guy born in 1948, and everybody else was falling for a rip-off.

Lester Bangs was desperately trying to influence the zeitgeist — and in the days before the internet, that term really meant something. It’s both comfortably cynical and very convenient for him to dismiss Beatles nostalgia as an artificial phenomenon — all those sheeple lapping up whatever their corporate overlords fed them. When of course the truth is much, much simpler: in the end, Lester Bangs didn’t have very good taste. And when you’re a critic, taste is… kinda important?

Bangs is emblematic of the type of critic we gripe about all the time over here, a real-life Comic Book Guy who fastened onto rock and roll because he was looking for a rough, tough substitute self. Then used his furiously strong opinions on its minutiae to shame, scold, and cajole people — to project all his own self-loathing outwards. “X is shit. Y is God. Z fans are morons who should be shot.” Uncool as cool, a gutter pontiff, endlessly speaking ex cathedra, endlessly angry and ungenerous, conferring “authenticity” like grace, who thinks his nonsense gains traction because it’s right — when it’s merely jagged enough to slice through pop culture’s overstimulated, decadent buzz.

Come on, Lester, be honest: you’re just mad that, even by 1982, it’s obvious that your counter-religion is never going to inherit the earth, so now you’re going to convince everyone you didn’t want the earth anyway. You’re just mad that, even by 1982, punk had been exposed as just the latest version of what it was trying to destroy, and whole generations of kids were utterly rejecting all that shit, for a bunch of music made before they were even born. How dare they? Don’t they understand rock? How could “Love Me Do” be as reeeeaalll as Lydia Lunch? You’re worried Lester, that even with all your carefully cultivated cynicism, what you think rock is and what it’s for, turns out to have been bullshit. You’re worried that you’re just another fan.

I was 13 in 1982, and Lester Bangs’ worst nightmare; because I’d heard a lot of the bands Lester loved… and liked the Beatles more. All throughout my teen years I tried to like The New York Dolls, The Ramones, the Pistols — the whole “tintinitus-IS-music” crowd. And then I’d take Bollocks off my turntable, and put on some horrible scratchy bootleg, where if you listened very closely, you could just make out John, Paul, George and Pete playing “Wonderful Picture of You” under twenty fathoms of tape hiss and time. That whole CBGB scene, London in ’76 — I guess you had to be there. But you didn’t have to see the Beatles on Ed Sullivan, and that’s the difference between authentically great art and merely the soundtrack to your first blowjob.

I didn’t like their reification of ugliness, and thought their sexuality was retarded and reactionary. I thought their vision of what rock was and what it could be was a dumb person’s idea of insight, pure marketing, that old Sixties canard dressed up in ripped jeans and leather. I thought it was all inutterably stupid. And just as John Lennon often cloaked his lies in a pose of utter honesty, people like Lester Bangs took this infantile and wholly artificial marketing concept and held it up as some kind of cosmic truth.

To people like Lester Bangs, loving the Beatles is a threat — not just because it shows that they are suckers, but also how it puts their insights in competition with all the other critics that came before. When Lester Bangs writes about The Shaggs or Richard Hell, he can say whatever he likes. But reading Lester Bangs on the Beatles, we can see just how original and smart he really is… or isn’t. “Beatles nostalgia” sends a chill up his spine. It threatens to unmask him as a fraud, a little man behind the curtain of Punk, of uncool-as-cool, a creation of Big Rock just as fraudulent as Led Zep, only less well-paid.

In his Village Voice obituary for Elvis Presley, Bangs wrote, “The ultimate sin of any performer is contempt for the audience. Those who indulge in it will ultimate reap the scorn of those who they’ve dumped on…”

You’re right, Lester. Have some.