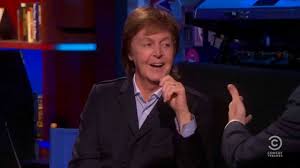 NANCY CARR • Paul McCartney’s hour-long June 12 appearance on The Colbert Report was great fun — if you missed it, you can watch it all here. Colbert’s introduction was characteristically hilarious and pointed. McCartney plays so many instruments he’s “a one-man karoke bar without the weird videos,” and Colbert is hosting a “150-person Paul McCartney concert. So Oprah, you and your free cars can suck it.”

And the interview featured McCartney seeming looser and happier than he’s been in many others. Partly this had to be knowing Colbert was a fan who would throw softballs right over the plate, but partly it’s down to the vibe Colbert reliably establishes. He can make fun of himself, and invites his guests to lighten up similarly. When McCartney responded to Colbert’s question about why he recorded “Band on the Run” in Lagos with “it was the climate and disease,” it was pretty funny.  And I loved the way he delivered the line “at times I was begrimed” when Colbert asked about the reception of “Ram” and early Wings efforts.

Predictably, there were no stunning revelations, though it was nice to hear McCartney attribute the Beatles’ consistent musical quality to the band’s “incredible democracy,” in which the endorsement of all band members was needed to include a song. And speaking of songs . . . . . why, oh why,  given carte blance to do the songs he wanted from his entire catalog, did he go with “Hi, Hi, Hi” as one of six songs to do? I know he’s promoting the re-release of “Wings Over America,” but why not “Picasso’s Last Words” or “Bluebird”? Arghhh . . . .

Still, watching the episode, I felt we were getting as close to the “real Paul McCartney” as we were ever going to. The experience reminded me of this photo, taken by Linda McCartney, which is the single most revealing portrait of Paul. 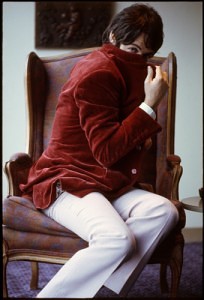 This photo captures the way McCartney both courts the public’s eye and wants to retreat from it. It IS his public presentation: jokey and theatrical on the surface, defensive underneath. He’s happy to give an audience what it wants, but he’s going to be cagey about what he discloses. He’s basically at ease with being a performer, in a traditional rock-as-showbiz sense, as John Lennon wasn’t. And part of being a performer is never fully lowering that velvet jacket. Playing it safe in this way often gets McCartney labeled “insincere,” but I think it’s intelligently self-protective.

Lennon and McCartney, despite their many similarities, had opposite reactions to the pressures of performing and fame. In his 70s interviews John talked about how humiliating it had been to be one of the “Fab Four,” how he hated wearing suits, how horrible concert experiences had been. After the band’s break up he went to being “just John” with a vengeance: there was to be no separation between his public and private selves. He and Yoko were going to talk to reporters while lying in bed. Their private life would become the subject of his songs. “Yoko and me . . . that’s reality.” I’m not sure how far he acknowledged that this posture inevitably involved performance, since the public and private selves would never be identical. (Check out Michael’s post “Time-Lapse Photography” and its comment thread for more fascinating thoughts on this question, from multiple perspectives.)

I see “Double Fantasy” (the album and the surrounding interviews, which function as a whole performance) as his doubling down on the idea of making all his art a direct expression of a private self, an insistence that it is possible to live as a public figure without subterfuge. As such I find it both admirable and pretty terrifying. It’s terrifying because, as Michael Gerber has often pointed out on this blog, it’s finally impossible to live that out without burning up in the process.

Not so McCartney, of course. He’s maintained a separation between his public and private selves, and he sees disguise and indirection as all in good fun. Whether he’s listing a songwriting credit as “Bernard Webb,” presenting the Beatles as Sgt. Pepper’s Lonely Hearts Club Band, or releasing music as part of the initially-mysterious entity The Fireman, he’s consistently playing with both revealing and concealing. I don’t think he’s really trying to fool us, because it’s too transparent. McCartney is always acknowledging what he’s doing as a performance. He’s showing us the jacket he’s pulling up.