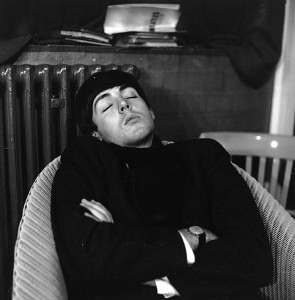 DEVIN McKINNEY  •  Beatle Ed points me to this most interesting, warmhearted, clear-eyed essay by James Marcus, “Letting Go of the Beatles,” posted yesterday at the Harper’s site.

Even we, the besotted, must accept the validity, as we cough the exhaust fumes of the recent 50th-anniversary ballyhoo (which Hey Dullblog did its share to amplify or perpetuate), of a certain feeling of fed-upness with all things Fab. So Marcus’s piece gets me, and probably a lot of other Beatleheads of considerable duration, thinking. To delve into all the points where he and I are in essential comity would mean reproducing most of the essay. So I’ll confine the present remarks to describing a couple of foundational points where we differ.

While Beatle memorabilia are, for me as for Marcus, fetish objects, part of whose function is to stop time, that is not because they are “supposed to keep me from growing old.” They’re quite like a mirror, yes, a thing frozen and reflective, but in which I can see the changes I’ve been through since I last looked at/into them—be that 10 days or 10 years ago. (Forget about 30 or 35 years ago!)  One reason the Beatles’ music remains richer for me than any other kind is that it has served, quite incidentally and without any making-it-so on my part, as an index of personal deepening and broadening—and sometimes shallowing and narrowing: of personal change, that is, in all directions. They don’t always reflect me handsomely, or winningly, or in the happiest conceivable way. But the fetish object, itself unchanging, always reflects me differently than it did the last time we met. So the “time” that is “stopped” when I look into my memorabilia mirror is a unique and irretrievable moment: there never has been and never will be another like it. That, it seems to me, is the opposite of trying to stay young forever.

“Because I’m a skeptical person,” Marcus writes, “I tend to grow suspicious of the things I love.”  Man, me too!  That’s what I’m most suspicious of—not because I assume I’m wrong (quite the opposite of that) but because my responses are purely and solely mine, and I have unlimited license to question, analyze, revise, or reject them. I can be harder and more challenging of myself because I’m the one person in the world I don’t have to worry about offending: I always know it’s nothing personal. Additionally, it’s often been said that the nature of critical thinking, of which I try to be a proud and unapologetic practitioner, is “Yes—but.” I.e., “This is good. But that’s not all it is.” Or, “This is bad. But that’s not all it is.” Or, “I love this. But that’s not all I do with it.” Anything that can be questioned should be questioned—especially anything that seems so easy. Is it really that easy? If so, let it stand the test of suspicion; and if it doesn’t fold under questioning, let it emerge stronger on the other side.

Case in point: The Beatles. It seems natural and right for some doubts to have an expiration date—or statute of limitations. Really, can even a skeptic be suspicious of his love of the Beatles after so many years, after so many phases of rejection and renewal have come and gone?  So many temporary fatigues followed by so many breathless rediscoveries, with no hint that the cycle of recurrence will ever cease?

I analyze the Beatles at length. I question them, and myself in relation to them. I poke at, dig into, pull apart, and chew anew whatever piece of their temporally inert yet still throbbing body tickles my taste at a given moment. They are that abundant, that fructifying. If I get exhausted, it is not because the Beatles are exhaustible but because I, being a hog for sensation, will inevitably need other bodies to chew on. Being also a sort of mad scientist in the Frankenstein line, I will even need to go away so as to create bodies of my own, for others to chew on or spit out. (Those are called books, articles, and blog posts.)

I have gone through many phases of being, or seeming, tired of the Beatles. Of thinking, okay, enough for a while. The seductions don’t seduce; the dazzle goes dull; the gilt (to steal a phrase from Carr and Tyler) seems to have worn off the gingerbread. Ever since I was a kid, I have periodically wandered off from the Beatles’ musical, visual, and historical smorgasbord, feeling fully sated if not simply stuffed, so as to discover or reconnect with other artists, genres, styles, potentials—or to get away from music altogether: simply to read, think, let my world go quiet for a while. It’s biological and intellectual need masquerading, for the moment, as Beatle fatigue.

For a long time, I thought of these phases as rejections. But they weren’t. They were simply times of going away, imperative preludes to the eternal return.

I respect James Marcus for retaining a certain skepticism. But where I feel his grain of essential doubt, I do not feel any of my own. My Beatles love is abiding, everlasting, subject to but unmitigated by what only appears to be fatigue or fed-upness. In fact it is so much a part of me that, if it may be anthropomorphized as a “he,” it is like “The Other” in Edward Thomas’s poem of that name:

He goes: I follow: no release
Until he ceases. Then I also shall cease.