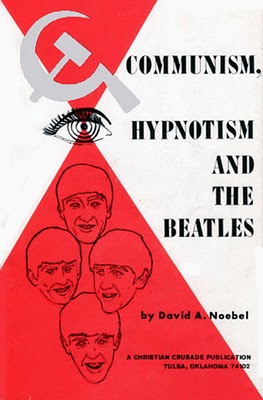 This afternoon, while trolling the internet for something to listen to while I was in the bath, I stumbled upon this podcast from rockcritics.com, which proved to be a very interesting roundup of Beatle tomage by Tim Riley, author of Tell Me Why (and a bio of John Lennon which I will doubtless purchase and read).

Our own D. McKinney is singled out and glorified, rightly so. Anybody reading Dullblog who hasn’t read Magic Circles should go do so immediately.

I move we should assemble a essential Beatle Bookshelf. Any seconds?

PS–In finding the photo for this post, I stumbled across this blog. No communication is safe from this kind of thinking. It’s totally insane, which is why I feel perfectly safe inserting no less than 180 hidden references to Satan, sun worship, freemasonry, and the occult into this post. (Hint: #1 is “Dev” in the title; you only THINK it’s short for “Devin.” #2 is also “Dev,” a male Indian name, Indians being pagans and thus Satan-worshippers.) Why 180 clues? 6+6+6+0=number of the Beast! Or is it “the Beats”?