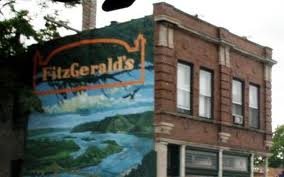 Great mural outside, great music inside

NANCY CARR * Last night I saw the Beatle Brothers at Fitzgerald’s in Berwyn, IL, giving the crowd the ultimate Christmas gift for Beatles fans—four hours of  covers played with expertise and passion, featuring the best Lennon and McCartney vocals I’ve heard outside the real thing. Far more than any dress-up-like-the-Beatles-band, Phil Angotti and Jay Goepnner, along with their stellar crew of backing players, put across the emotional intensity of the music. Their spontaneity and obvious love for the music they’re performing made last night’s show fly past, though they started playing a little after 9:00 and didn’t stop until after 1:00 a.m.

Playing to a capacity crowd, they covered the range of the Beatles career and included some forays into Lennon’s and McCartney’s solo years. Jay Goepnner sounds uncannily like Lennon, and he gave amazing performances of “Instant Karma” and “Jealous Guy” during the solo part of the show. Phil Angotti, for his part, can do the full McCartney like nobody else I’ve heard. Hearing him nail the throat-shredding vocals on “Oh! Darling” and “Maybe I’m Amazed,” complete with the highest “oooh-oohs,” was spine-tingling.

The crazy thing about the Beatles is that four hours doesn’t exhaust the cream of their catalog. The Beatle Brothers did a huge number of songs—everything from early hits like “I Should Have Known Better,” “I Want to Hold Your Hand,” and “She Loves You” to the late 60s’ “Lady Madonna,” “Dear Prudence,” and “A Day in the Life.” Some of the best moments were the unexpected songs: “You Really Got a Hold on Me,” “Kansas City (Hey Hey Hey)” and “Anna (Go to Him)” aren’t songs you’re likely to hear at most Beatles-themed shows. It says everything that needs to be said about the Beatles that another four-hour show with different songs from the catalog could be just as strong.

Finally, one of the most enjoyable aspects of the show was seeing the obvious affection Jay and Phil have for each other. They clearly appreciate each other’s talents and do all they can to let the other shine. They not only get John and Paul’s harmonies right, but conspicuously take pleasure in working together to create joy for each other and for the crowd. This show made me think wishfully about what might have been had Lennon and McCartney had more time to work through their differences.