Mick Jagger on The Rutles 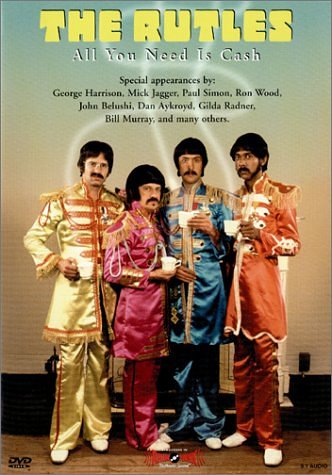 Cash is all you need…

If you haven’t seen All You Need is Cash, the 1978 Python/SNL jam that created the Rutles, you’re in for a treat. We’ve covered the Rutles before on Dullblog — here — here — and here — but I just ran across a transcript of the interview with Mick Jagger from the movie.

“QUESTION: Were they trying to sell you songs at that stage?

MICK: A bit later on they did, yeh. The one for that was Dirk really. He was a real hustler for the songs. Any old slag he’d sell a song to. I remember they came down once and we were trying to rehearse and they said do you wanna song and we said “yeh”. We were always really open to songs cos we didn’t write our own and the Rutles were always well known for their hit-making potential ability. So they ran around to the corner to the pub to write this song and came back with it and played it to us and it was horrible. So, we never bothered to record it. I used to see them a lot then. The Rutles in London, particularly Nasty. Nasty and I got on well. Barry used to get a bit drunk in nightclubs you know and start punching out the Bigamy Sisters.

QUESTION: Were you at Che Stadium?

MICK: Yeh, I was at Che Stadium with the Rutles. That was the first big outdoor concert by a rock band, the Rutles at Che Stadium, so it was an exciting event. I even rented a helicopter for it. Came in, zooming over the crowd, never seen a crowd as big as that for a rock concert before, ran in and met them before they went on. I think they were nervous, you know, in front of all those people, but the thing I remembered most about is running out in the middle of this field and you couldn’t see em and they were just miles away. Is it really the Rutles? It might be somebody else. And there was Barry on this eighteen foot drum riser swaying in the wind. I thought it was going to fall over. We had a good party afterwards though.

QUESTION: Did you hear much?

MICK: No. Nothing at all. You couldn’t hear anything.

QUESTION: How long did they play?

MICK: About twenty minutes and that was it, off, helicopter, back to the Warwick Hotel, two birds each.”

And here’s the outtakes from the interview:

My pal Brian McConnachie was at SNL when the Stones were hanging around. He’s been rather cagey about the stories, but I’ll keep trying. 🙂