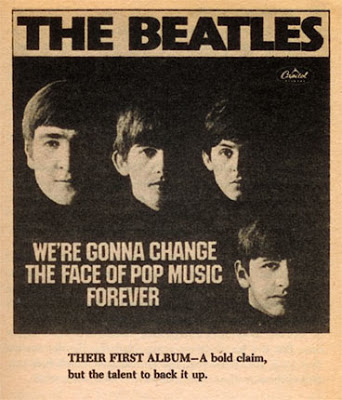 DEVIN McKINNEY  •  Note from the future (2013): Refreshing this post four years after assembling it, I find that a couple of the hyperlinks are no longer functional—one doesn’t exist, while the other exists but doesn’t yield the indicated information. But this is the story of a few hours’ Internet idling, a mesh of the long-gone afternoon, and rather than rewrite it to excise the dud links, I let it stand. The links once worked, and they said what I said they said. Honest.

As I commented on “The Best Dancer” below, thinking about Chuck Klosterman’s piece got me thinking about Mark Shipper’s piece—which, being a book, is a much bigger piece. Its title tells you that: Paperback Writer—The Life and Times of the Beatles, the Spurious Chronicle of Their Rise to Stardom, Their Triumphs and Disasters, Plus the Amazing Story of Their Ultimate Reunion. That blows the hell out of Klosterman’s title, which is a mere five words long.

The book behind the title likewise goes much further down the same path toward a reinvention of not just the Beatles’ factual history, but also the general perception and popular mythology around them. “The finest novel ever written about rock and roll,” goes the Greil Marcus blurb on the back; “Marvelously entertaining!” says Hilburn of the LA Times; “Devastatingly funny” writes Selvin in the SF Chronicle.

I love the book my own self, and began wondering what became of Shipper. Apparently others have wondered that too. My Internet caught this email exchange (whence I swiped the images posted here) between Scott Woods, majordomo at Rockcritics.com, and Richard Riegel, who reviewed Paperback Writer for Creem upon its 1978 release. Woods and Riegel discuss the novel (Scott reckons it funnier than The Rutles) and the mystery attaching to its now-you-see-him-now-you-don’t-author, who followed up the Beatles satire with the compellingly titled How to Be Ecstatically Happy 24 Hours a Day for the Rest of Your Life, and then went underground, or at least sufficiently near to the fringes that he may be theorized as the J. D. Salinger of rock writers.

Riegel mentions that our elusive satirist now does something called “The Shipper Report,” which would make him the “rarely-seen radio guru” referenced here, as well as the subject of this vintage piece of journalistic documentary from the Bush I era. Though Shipper is also said to have written for Creem in its early days, Woods says that in scanning back issues he has never come across his name. However, at the same time, Shipper demonstrably was in charge of a fanzine called Flash, which I discover is quite highly regarded in the annals of that particular subculture. Fanziner Christopher Stigliano constructs what must stand as the definitive history-critique of the short-lived Flash, including reprinting Shipper’s Bangs- and Meltzer-influenced mission statement. Down below, if you scroll, is an extensive thank-you response from Shipper himself, which would seem to confirm his continued existence as of February 16, 2007. And another blog entry (sadly now unavailable–MG), with a much fuller low-down on the content of Paperback Writer than I’ve offered here, includes another, much shorter response from Shipper, which brings us up to September 18, 2008.

Time since then, as far as I can find it, goes unrecorded in the public forum. But I hope Mark is working his wang dang doodle somewhere this very moment, well and happy.

One more piece of Shipperiana, or related bizarrerie: A centerpiece of Paperback Writer is a deliriously imagined songwriting summit between a fully-baked Lennon, McCartney, and Dylan, the three magi drawing from their collective marijuana mists a horror of Surrealist wordslop called “Pneumonia Ceilings.” (“You’ve got the idea,” Bob encourages Paul, “but the problem with your line is that it could make sense.”) I recalled that I had not so very long ago come across a reference to this “song,” but a reference that assumed it was real! Couldn’t recall where, though, till some peremptory ‘netting led me here, where the story is likewise repeated for fact.

Ta, Rock Turtleneck: Your scroll-down commentator rights the historical wrong, and you remind me that where I saw Mark Shipper’s “Pneumonia Ceilings” gag first become academic-archival myth was in the gazillion-page reference work The Bob Dylan Encyclopedia, by Bob scholar Michael Gray—which our very own Beatle Ed had me review in the Village Voice three years ago!