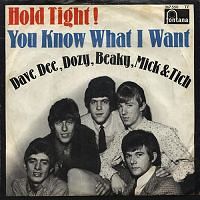 Don’t ask me which is which.

Some of you might remember George’s introduction to “I Me Mine” on the Anthology discs where he name-checks this 60s band—which was, apparently, internal Beatles slang for each other.

Now, thanks to this post from Dangerous Minds, I think we perhaps know where The Beatles crossed paths with them…Vic Lownes‘ Playboy Club.

“But,” you say, “John, George, and Ringo were all married.” To which I respond, “They only went there for the articles.”

(PS—Just last week, I bought a copy of Playboy from December 1966—a business expense, I assure you—which has a hilarious article about Swinging London, and some photos taken concurrent with this newsreel.)