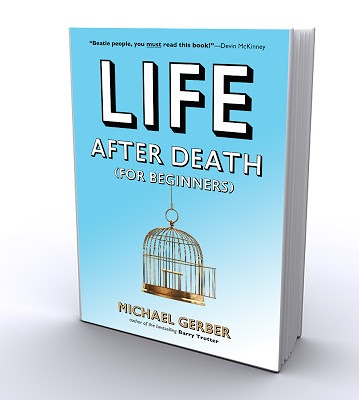 Because I am still not quite clear on the whole “capitalism” thing, I’ll be offering my satirical Beatle noir mystery, Life After Death for Beginners, as a free download this Thursday, September 30. While I’m off watching a preview of “Nowhere Boy” at the Egyptian, you can get three years of my freakin’ life in convienent .epub or .mobi format without paying a red cent.

LADFB stars Tom Larkin, an impossibly famous rock icon who dies tragically at the hands of a deranged fan—or so the world believes. In reality, Tom narrowly escapes with his life. As he recuperates in a secret hospital for the super-rich, his loving but imperious wife Katrinka becomes convinced that it’s safer for everyone if the musician stays dead. Reluctantly, Tom agrees to live out his days in obscurity… until an old enemy reveals that his life is still in danger. Stripped of his former fame and access, Tom has to figure out who tried to kill him without publicly revealing his survival. His search leads him back to his old life, to the manager who made him a star; to the other three members of The Ravins, each dealing with his legacy in their own way; to his estranged daughter and the son who thinks he’s dead and of course, to Katrinka, the eccentric, devoted, public face of the Larkin myth.

On September 30th, go to my website (mikegerber.com) or the book’s site (lifeafterdeathforbeginners.com), select the format you want, and enter the coupon code “FREEDAY”. Then, instead of charging you $4.99, you should get it for the glorious sum of zero dollars and zero cents. The coupon’s only good for 24 hours, but I’m telling everybody now so that they set their iCals/Google Calendars/Zeo alarm clocks/trained housecats. The coupon activates at 12:00:01 on Thursday morning, and ends at midnight that night. After Thursday, prices will revert to normal, which is still a pretty good deal if you ask me. I would be really happy if a lot of people downloaded it, so tell your friends.

I love Life After Death for Beginners—it’s the best book I’ve ever done, by far—and I couldn’t have pulled it off without the support of a lot of friends, many of whom read Dullblog. This is just a small token of my thanks to them, and my affection for the lovely little community that’s sprung up here.