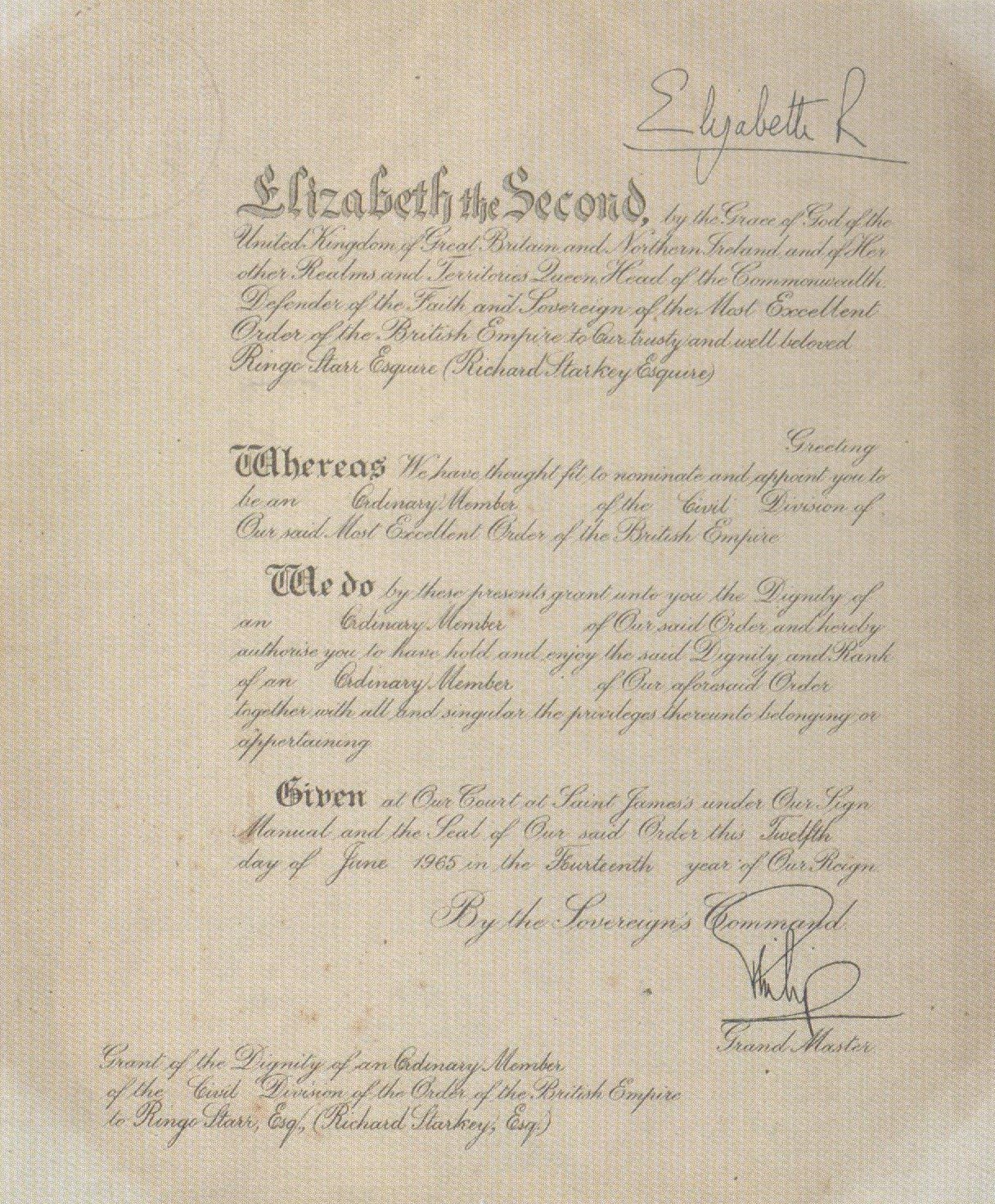 A sort of fan letter.

(Above: Ringo’s letter from Queen Elizabeth II, 1965, h/t to Kenwood)
Folks, just in case it’s interesting, I’m pasting a comment I just left over at A Tiny Revolution. As expected, the thread on Lennon/McCartney is interesting, and well worth adding to, if you’re so inclined. Enjoy–MG

Right on, AndyC. 1000% agree about Paul and Linda’s impact on those two issues–especially in the UK–and the observation that the McC’s impact has been specific, while Lennon and Ono’s impact has been conceptual. I personally prefer the former approach.

I’m skeptical of artists as agents of genuine social change (and that goes for satirists, too), but each of us uses the gifts we have for good or ill, and I can’t slag John Lennon much. The guy was conflicted, flighty, and prone to taking bad advice, but he was intelligent, extremely well-read, and (I think) genuinely looking for wisdom. That he couldn’t live up to what we think we would do in his uniquely weird situation, says more about us than him. Just as there are some people who buy the St. Lennon myth, others are compelled to go the other way. Here’s what I know for sure:
a) Lennon was shot a few days before flying (with his family) to San Francisco to march in support of some Japanese-American workers.
b) I spend my days typing comments on a blog.

As far as the “was Lennon assassinated” question, we’ll never know. You give busy cops an open-and-shut case, and they shut it. Add to that Chapman’s change of plea (which prevented a trial), and there simply isn’t the mass of timely data that would be necessary to unravel anything. The NYPD’s records would be interesting to look at, though.

But the “why shoot a rock star” rationale is foolish; there’s no question that Lennon was considered to be a political actor by the US government since 1972 if not earlier–Operation CHAOS, anyone?–and once that happened, he stopped being treated as a musician and started being treated much more roughly. Why surveil a rock star? Why harass a rock star? Why spend millions trying to deport a rock star? You got me; I think it’s all silly. But if somebody surveils/harasses/attempts to deport somebody, it’s reasonable to entertain the possibility that, once back in power, they would go further.

Even from the outside, we can see that as the guys at the top changed—Johnson/Nixon/Ford/Carter–how Lennon was treated shifted markedly; therefore it’s far from absurd to suggest that Lennon was the first casualty of the culture war. The election of Reagan/Bush was perceived as a profound shift, and ushered in the particularly muscular reptiles we’re still battling today. I’m not saying that’s what happened, just pointing out that we’re not wondering if the Shriners murdered Bootsy Collins.

The other thing that I think is particularly important for us to remember–especially commenters on THIS blog–is that the power of leaders comes from the people who pay attention to them. A lor of people paid attention to John Lennon in 1980, including in a political sense; one personally may think they were idiots for doing so, but they did. Rightly or wrongly, The Beatles were perceived as a socio-political force almost from the beginning. This made the four of them uncomfortable–to J/P/G/R it was just a haircut–but that’s what many people demanded from them, and eventually J/P/G became more comfortable giving it…in politics, in diet, in religion. To think of them as empty-headed moptops crooning pop tunes may feel pleasingly hard-bitten, but it’s not really accurate, either in who they were, how they acted, or how society reacted TO them. The Beatles always claimed they were simply riding a wave, and that is true; but to deny that they were part of that wave, and helped make that wave, is factually incorrect.

In interviews, Lennon always denied “The Beatles as leaders” meme, but he recognized that it was there, and used it, with varying degrees of comfort, until he was shot–in circumstances that hadn’t ever happened before then (except in “Stardust Memories”!) and really haven’t happened since. That could mean it was a random act. Or it could mean that it was the final move in a political game particular to that time and place–just as MLK’s assassination was. To be scornful of that possibility seems a bit callow, but YMMV.

I guess what I’m trying to say is no matter what WE think of Lennon or The Beatles’ politics, or activities in the political realm, it is simply factual that he/they were considered to be political actors, especially from 1965-80. Whether this is appropriate, a good idea, distracting, infantile or absurd is an individual opinion–but to deny it, in the face of all we know, is a fashion statement. It’s no deeper an opinion than saying, “Who the fuck cares about Rosa Luxemburg, what a weirdo.”

I personally don’t need The Beatles or John Lennon to inform my politics–the music’s plenty, thanks–but I know guts when I see ’em. John Lennon faced the possibility of death over his opinions (during the entire ’66 US tour, for one thing), and yet kept saying what he believed. That’s a genuine commitment to honesty and truth, and one needn’t go along with the canonization crowd to admire the hell out of that.