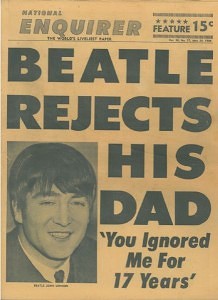 Story, nothing — John should’ve sued over the PICTURE

A side-question from the indefatigable @Rob on whether or not Paul McCartney actually was pissed off by Hunter Davies printing this interview in his revised edition of his book The Beatles, sent me off on a desultory Google search to determine the truth. After two minutes I could not, and I don’t have more time to investigate this fully. Everybody, please feel free to fire up your own brains/Googling machines.

When it was mentioned in a comment thread; seeing that it was a private phone call taken down after the fact, not a formal recorded interview, and that the content was significantly more revealing than McCartney’s usual press interactions (especially regarding his old partner), I felt that the assertion that Paul was angry made sense. But this was an assumption.

This brings up something I think is worth setting down in pixels: Hey Dullblog is a blog for “people who think about the Beatles a little too much,” no more or less. I would caution you against taking anybody’s opinion as fact, mine included. Like every other blog on the internet, the site isn’t fact-checked or sourced, and while our community standards in this regard are admirably higher than most of the web, in the end, it’s all opinion. Caveat lector.