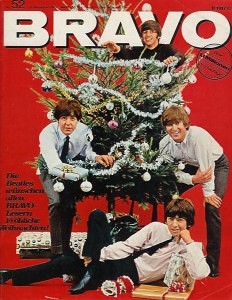 The Fabs look very strange on this, right? George looks like Brian Jones

As everybody is still busily digesting their Beatle-related gifts (how many of you got “1+”? Anything else to review?), I will confine myself to a quick check-in/roundup.

I’m happy to report that 2015 was a banner year for Hey Dullblog. Traffic was up over 43% from 2014. We are reaching more Beatle people than ever before, and will nestle to a stop just under 150,000 pageviews. I am sure that much of that reader interest was due to our playful, informed, incisive-yet-respectful comments, so thank you, thank you, thank you. You guys are what make Hey Dullblog (as far as I can tell) the most popular (and in my humble opinion) best Beatles fan site on the internet.

By the way, last month I upgraded our servers so if the site’s running quicker, that’s why. If Dullblog’s ever down, or acting weird, drop me a line and I’ll fix it. I am investigating a new WordPress theme, primarily to increase readability in the comments section. So watch this space. And if there are features that you see other places that you want here, holler.

With all this new traffic, it’s perhaps no coincidence that more and more of the posts on Dullblog are being written by people other than myself. Special thanks go out to all the ex-lurkers who made the leap this year — both those who wrote posts, and others who sent me comments or suggestions that turned into posts. 2015 was very busy for me, and 2016 is looking to be even busier, so if Hey Dullblog’s going to continue to improve, it will come from you guys. Please post more, and suggest more.

Dullblog now boasts 611 posts, 91 of which were new to 2015. This great wodge of text and images is really incomparable, an ongoing discussion that encompasses all angles of the Beatles and their times, which is what I’d hoped Hey Dullblog would become back in 2008 when Devin and Ed and I decided to break ground.

No matter how frequently you check us, it’s practically guaranteed that you’ll miss a few. In case you missed any, here are our twenty highest-traffic posts of the year:

Happy New Year, everybody. Thanks for reading.