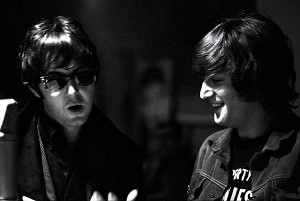 I feel like Peggy Lee: Is that all there is?

If The Atlantic put this on the cover, it must have been a slow cycle, without much happening in the world. Or maybe they just needed a shot of Beatles magic in the rump.

“The Power of Two” isn’t a waste of time, because it gives us all a chance to engage in more Beatle chatter, and is further evidence, or suggestion, that the Beatles will not dematerialize into nostalgic ether when the Baby Boomers pass from our midst.

But taking the piece on its intrinsic, not incidental merits, it’s a waste of time. Mike’s post gets at the systemic dopery of Big Idea journalism that pushes over an old banality with two fingers, only to present us with a new one—one upon which the author’s new book happens to be based. That’s how these Big Ideas get before our eyes: Author has a book to promote, and Agent and Publicist brainstorm on how it can be saddled on the back of this or that contemporary event or popular focus. It matters little or not at all what the connection might be, its meaning or its power; the idea is the publicity-driven alignment of new product with established popularity. 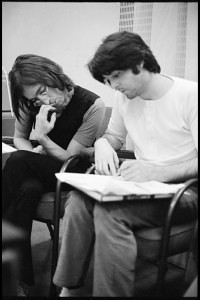 There’s really nothing challenging or novel here. Shenk claims to be overthrowing received wisdom, but does it mostly by endorsing clichés that were valid, whenever they were, maybe 40-60 percent of the time. (“The work John initiated tended to be sour and weary, whereas Paul’s tended to the bright and naïve.” Ehh, only at first glance—even “I’ll Follow the Sun,” one of Paul’s earliest love songs, is way less naïve [because more passive-aggressive] than it sounds, rendered in his pearly tones; and the McCartney songs of the Help!-Rubber Soul phase can be just as “sour and weary” as anything contemporaneous of John’s.) I appreciate the primacy Shenk gives to the White Album as key Beatle expression—as I would, given my perverse proclivities for avant-garde experimentation and conflicted expression, not to mention “real art, real honesty, real genius”—but this is hardly a new tack to take. Others (myself included, he said, boasting) pointed out long ago that the fun-house effect and dark-attic ambiance of the White Album lie partly in Paul rocking out and John going wistful—each slipping into the other’s clothes, as it were, and finding they are still themselves.

Withal, Shenk builds his understanding of the Lennon/McCartney collaboration from the same old binary oppositions that Beatle writers (myself included, he said, cringing) have employed since before the group broke up. These binaries have a use: they are a place to begin to make sense of the group, get a purchase on their totality. John was this; Paul was that; George was the other; “Ringo was the drummer.” When confronting something of Beatle magnitude, it’s only smart to begin with first principles and safe observations. You have to crawl before you can walk, ga-ga before you ah-ha! But we should be past such fundamentals by now; we’ll never catch up to the Beatles wearing the same old lead galoshes. (We’ll never catch up, period, but writing about them is the attempt—the dream of catching up.)

Shenk sounds completely aware of this when he says, “Distinctions are a good way to introduce ourselves to a creative pair. But what matters is how the parts come together.” Yet he demonstrates this principle in close to the most reductive possible terms: “the power of two” is even less resonant a paradigm than the four-way “John was this; Paul was that,” etc., because it reduces the Beatle brew to a mere two—actually, one—essential ingredient. 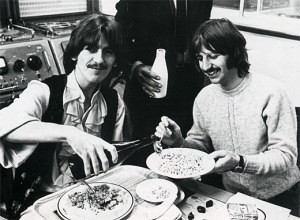 Nancy gets at this limitation of Shenk’s from another direction: he has nothing useful to say about the roles George and Ringo played in making John and Paul what they were, and what we perceive them, and thus the group, to have been. There’s no way of quantifying what the two “other” Beatles brought; maybe this, aside from more obvious factors of personality and vision, is why they have always gotten such short shrift. John and Paul knew George and Ringo could play their instruments not just competently but imaginatively, that they could suss out the soul of a song, intuit the magical possibility in a scribbled lyric and scrap of melody. I doubt that a single one of the “songs” John and Paul brought to the studio was, properly speaking, a “song,” that is, close to fully realized; it took the band, all four of them—at least: don’t forget George Martin, etc.—to construct solid musical units from such homespun gossamer. Solid units that also had the flexibility, contingency, and inexhaustible surprise of common good times, dreams, nightmares. How do we begin to understand the psychological value of this—the utter freedom John and Paul felt to go wherever they would go, knowing that George and Ringo could take them to an even farther, richer place?

While we’re in the realm of not-newness: literary theories of postmodernism and deconstruction messed up (or “problematized”) the myth of singular genius decades ago—messed it up far worse than Shenk does now. Roland Barthes and his satellites in the American academy not only pronounced the author/creator dead, they insisted true authorship be credited to the reader/perceptor. Since the author was only rearranging symbols and signs, the work itself had no objective identity, and each person who experienced it was creating it anew on his or her own eccentric terms. The power of two? How about the power of thousands? Or, in the case of Shakespeare, say, of millions? That’s collaboration.

Even these snooty academic presumptions have been around long enough to have filtered into mass thought and pop culture—at worst, as tired ironies and empty conceptualities; at best, as ways of reordering human experience beyond the linear, the dyadic, the Aristotelian obvious. That’s to say, I’m not at all sure that The Myth of Singular Genius is so broadly accepted anymore, let alone that it has the power it once had to limit the scope of relationships and creative possibility. Does this shibboleth really need killing?

The difference between Shenk and Barthes is this. Barthes’s idea is extreme, eminently debatable, and—to those who can’t go past the disagreeable exterior of a thing to ransack the useful bits inside—irremediably, even offensively, ridiculous. It is meant, like all such thought and expression, to be argued with, modified, put down, burned down, and superceded; it is meant in its brief half-life to push things forward an inch or two. Shenk’s idea, meanwhile, is mainstream, eminently logical, and utterly banal. It isn’t meant to be argued with, partly because it is content with its wan sureties, and partly because it doesn’t read as if it cares enough about itself to put up a fight. It won’t push things a smidge in any direction.

I sound way more contemptuous of Shenk than I feel—but then writing can get away from you. He’s just hustling, as we all are, to get our words, notions, and names out there, wherever they might find a hook and have some lasting life. Sometimes we hustle words that matter deeply to us, ideas that are fixations, causes we’re willing to evangelize to the point of mania; and sometimes we hustle fluff. Judging from “The Power of Two,” Shenk’s contribution to the human saga will come elsewhere than in the realm of Beatle-think. I’ve long been convinced that the only Beatle-think that will get anywhere near the Beatles—retrieve some scrap of what they were, what they did, what they mean, how they sound, how they feel—is the one that eschews binaries and dichotomies, singular genius or the power of twos or fours or fives, that looks at everything as a coalescence, inspired calculation resulting in eruptive happening—a mad congeries of things that can be studied, logged, analyzed, and anatomized but never, ever explained.

The ultimate study of the Beatles will be called What the Fuck?!? and will not be written until after we’re dead. But we make notes toward it all the time, on this screen and in our heads.

The Beatles Writings of Joshua Glenn: “Origin of the Pogo”