“They were getting to be like Paul’s band, which they didn’t like,” quoth the Yoko, via The Huffington Post. The interview’s from 1987, and it’s from Rolling Stone, so we can expect it to be simple-minded and St. Lennon-ish; but this canard deserves a bit of scorn. Can I? Thanks.

Oh what a shame it was for Paul to run roughshod over those other three grown men, forcing stuff like “Hey Jude” and Abbey Road on the world. Why, instead of wasting all that time, John and Yoko could’ve given 500 more interviews, and filmed countless more asses. Or John could’ve continued to explore the fascinating nexus of ragged Chuck Berry covers and heroin. And let’s not forget George, who supposedly suffered the most during Paul’s reign of terror. After all, George was in a living hell, a 27-year-old musician with the time and money and prestige to record anything he wanted with anyone, take long excursions to India, and buy his own freakin’ castle. (And what do you think paid FPSHOT’s bills in the 70s, 80s and beyond? Dark Horse, or Abbey Road?) 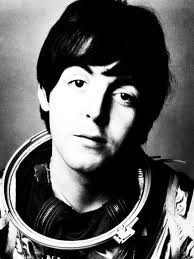 History’s greatest monster, preparing to extend his terror into space

I‘m being internet-dickish, I know, but the interesting question isn’t who broke up The Beatles but who said they had to break up? John and Yoko had been doing the John and Yoko Show for 18 months before April 1970; George and Paul had been recording whole LPs, producing groups, and writing and playing on Top 10 hits for other groups. Ringo wasn’t restricted by being in The Beatles—he was making movies (as John himself did in 1966). Far being a distraction from other pursuits, John/Paul/George/Ringo’s later Beatle activities gave them all more opportunities…and funded them to boot! (Yoko’s art installations were not big money-makers.)

OK, so maybe they had to break up to extricate themselves from Apple? Nope—they are still tied together by Apple, fifty years later. Apple will live on long after each Beatle is dead. Apple business meetings went on, pissing them off and making their lives worse, long after April 1970. If they’d stayed Beatles, they’d eventually have found a way through to where they are today. And the 70s would’ve been a lot more comfortable for all of them—maybe even Paul included—if they had been making an Beatle LP every year or two. They could’ve recorded the exact same songs, and sold many more of them; partly because of fan loyalty, but also because the songs would’ve been better.

The only good thing the breakup did for the four of them was—perhaps—discourage people from asking when the next Beatles thing was coming out. And it didn’t even do that; John bitched for the rest of his life about people asking when the group was getting back together!

Did Yoko break up the Beatles? No, but she didn’t help

So: the breakup was totally unnecessary, totally illogical, and in the end, totally useless. All it did was sow bad blood between the four of them, and stem the most amazing flow of creativity in the history of popular music. Maybe breaking up was a lucky break; maybe everything they’d do after April 1970 would’ve magically sucked; maybe it was time for them to stop. But all the reasons they ever gave/give, and the actual facts of the matter, don’t suggest breaking up was either obvious or inevitable. Nor did it do much good for them except perhaps psychologically. (Guys: that’s what therapy is for. It’s embarrassing, but so are lawsuits. And therapy’s cheaper, too.)

Yoko Ono didn’t break up The Beatles, John Lennon did—a fact which was obvious even as of Philip Norman’s Shout! in 1982. But there’s a reason why the “bad Yoko” meme won’t die, and it’s not the International Anti-Fluxus Conspiracy. The sources are absolutely solid on how Yoko played an instrumental role in creating John’s mindset towards The Beatles between 1968 and 1970. Was she constantly trying to convince her lover-then-husband of the great worth of the group, and the unimaginable access it would give him for as long as he remained a Beatle? Was she working to keep the fruitful (not to mention insanely lucrative) Lennon-McCartney partnership together? Or did she dismiss the group and everything it had accomplished, increase tensions within it, and encourage John to think of Paul as at best a square and at worst an active brake on Lennon’s own genius? And then—as mentioned in a recent thread—did Yoko actively discourage John and Paul from getting back together in 1975? Or was that just a coincidence?

When you’re listening to the survivors talk about this issue, remember they are business partners; for Beatle product to be released, they must agree; they are all tied together and peace is profitable. Maybe Yoko gets The Beatles now; I hope she does, because they were great, and they belong to all of us. And yes, obviously, what to us is an LP or a song, to them was a good or bad day at the office, a friendship (or lack thereof). But I’m still waiting to hear any of them explain why they had to break up—except that John Lennon was feeling insecure and wanted to lash out at Paul. Maybe he had every right to lash out; maybe all of us would’ve felt the same way he did. But it’s an awful shame it went down that way, for us, for them and (maybe most of all) for John Lennon himself.

Even if Paul was a terrible shit, and bossy—even if every late 60s “Paul’s an arsehole” story about him is true—he didn’t break up the group. John Lennon did, for small and selfish reasons utterly beneath him. And Yoko encouraged him to do it, and also, does not sweat.