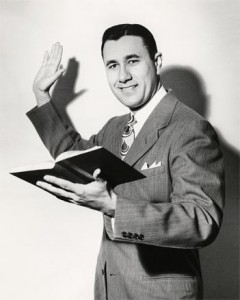 MIKE GERBER • Commenter Karen brought something to my attention recently that I certainly had a strong reaction to, and thought Dullblog readers would, too. In January, 1973, American televangelist Oral Roberts claimed in a speech that he’d received a letter from “ex-Beatle John Lennon.” The letter, which he said was handwritten, detailed John’s misery at his life as a Beatle, and his desire to be saved by Jesus Christ. You can read about it all here.

I’ve been wrong before, but I would be willing to wager $100 right now that this letter is a fake.

It misquotes song titles, misnames Julian as “John,” claims that Lennon was kiting checks (not impossible with the financially loosey-goosey Lennon, but even Albert Goldman didn’t unearth anything like that) and is incredibly ill-written and incoherent. It doesn’t sound anything like John Lennon, in prose or speech, drugged or sober. It does, however, sound exactly like what a cheesy TV preacher, unhip on a cellular level, might think John Lennon the famous druggie rock-n-roller would sound like. Parts of it sound like the old Beatles cartoon.

Could it be real? Sure—as I recently commented over at Dangerous Minds, John Lennon was a protean character who loved the put-on, which makes him catnip to both sides of the culture war. But this letter is so far at variance from the rest of the data, I’d need a lot more than Oral Roberts say-so to believe it. 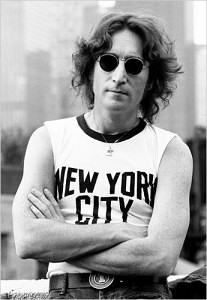 John was raised Church of England but—as the “more popular than Jesus” comment alluded to—that organization was nothing like the muscular, forthright, extremely political Christianity then more prevalent in the American South and now more widespread generally. During the Beatle years, John’s views seem to be solidly agnostic—conscious of the possibility of God, and perhaps even hoping for it, but not claiming certainty. There’s plenty of room in this attitude for a relaxed cultural Christianity and the Maharishi, or Babaji, or Swami Bhaktivedanta, or reading books about Milarepa.

So with this attitude, John was known to watch a televangelist or two, and was a pretty suggestible fellow; it’s not totally absurd that he would catch some holy-roller on a UHF station and dash off a letter, particularly if he were in an altered state. I’ve read about Lennon’s brief Born Again phase (spring 1977), and have never found any reason to doubt that it happened. But this supposed Oral Roberts letter isn’t any version of John I recognize, as a person or as a prose writer. And, tellingly, the original cannot be found. Maybe some of you feel differently and think the letter is real; I’d be fascinated to hear why.

Veracity aside, there are two parts that interest me: the first is, no one affiliated with the Estate has expressed any opinion about this letter. That surprises me, because it was even mentioned in Oral Roberts’ obituary in The New York Times. It’s not a new thing, apparently.

The second part is how after 1968 or so, John Lennon seemed to exist more as a symbol than as a person. While this makes some sense after a person’s death, what’s striking in Lennon’s case is how much it happened while he was still living, and doing things that were at odds with his iconography. I think that was what “the Lost Weekend” was about, frankly—resentment over being put into a box, and determination to live as he wanted to live (and how his contemporaries were living). This great restricting aspect of modern celebrity is, I think, very difficult to navigate; people must perceive you through a scrim of legend. And because people tire and legends do not, one usually watches the person fade as the legend grows brighter; think Charles Chaplin, or Lennon’s neighbor Greta Garbo. Garbo’s tactic was to let the legend occupy the public space, while  the person lived the life of an ordinary (but well-off) Manhattan housefrau. I think that was what Lennon was trying to do from 1976-80, after “breaking out” hadn’t worked.

Paul McCartney uses a different version of the Garbo technique—but because he sees that denying access only builds an appetite for more access, he lets the public Paul do the public things, and maintains a private person in a protected space. Nancy has talked about this extensively and well. For me, I think it’s summed up in Paul’s song “That Was Me“—which is itself the technique I’m talking about: Paul revealing something private (this split in how he thinks), in the most public way. This stratagem seems to be really successful, if you can pull it off. One can be known by the public, but also have a place out of publicity’s glare. I personally have never doubted that Paul McCartney is a Christian—but in that mellow, C of E by-way-of-the-Sixties manner. I also have never had any great caring one way or the other, so Paul is free to do, or not do, as he pleases. 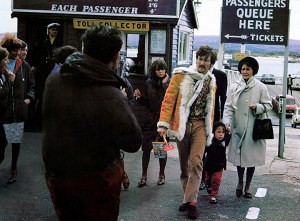 When it comes to John and Jesus, evangelical Christian groups increasingly claim that he was on their side, but that’s a distortion for political gain. Just like it’s a distortion to claim that since John didn’t like taxes (what rich person does?) he was a Reaganite. A quick perusal of these stories show that they are a single source being propagated by the right-wing talking to itself. Right-wingers equate John Lennon with the Utopian Sixties, and since the mere existence of those years bother the heck out of them, “proving” that Lennon wasn’t really the hippie he seemed looms large for them.

But just like the Utopian Sixties had strong connections to Vatican II, there’s plenty of evidence that John Lennon was interested in Christianity—given his wide-ranging mind, how could he not be? And had he lived, it seems possible that he would’ve lent lip-service and support to groups and causes of every stripe, shady, saintly and in-between. (That’s why he thought people were unwise to look to celebrities to figure out what to think.)

The TL;DR on John Lennon and Christianity

Underneath this surface changeability John Lennon’s beliefs seemed to be remarkably stable:

“Our society is run by insane people for insane objectives.”
and
“I believe in God, but not as one thing, not as an old man in the sky. I believe that what people call God is something in all of us. I believe that what Jesus and Mohammed and Buddha and all the rest said was right. It’s just that the translations have gone wrong.”
and finally
“If someone thinks that love and peace is a cliche that must have been left behind in the Sixties, that’s his problem. Love and peace are eternal.”

John Lennon’s tolerance for a religion—the social and financial expression of a ontological philosophy—seemed to be directly proportional to how fully it agreed with those statements. So while it’s possible that he could go through a born again phase, that simply couldn’t last; not because of Jesus, but because of born again culture, particularly in the US in the late 70s. And the idea that he’d reach out to Oral Roberts—his absolute cultural opposite—in a way which he knew would become immediately public seems preposterous. To me the letter’s an obvious forgery, an attempt by someone to win countercultural converts and weaken Lennon’s standing in the New Left.

You don’t have to work hard at all to construct a Lennon who believed in the humanistic side of Christianity. You have to work very hard, however, to make him part of today’s Laffer-loving, God-and-guns right-wing noise machine…but we shouldn’t be surprised when people try.

I’m sure people have lots of thoughts about this topic; I look forward to reading your comments. Is the letter real? Was John’s dalliance with born-again Christianity just that, or something more? Exercise your freedom of squeaks below.