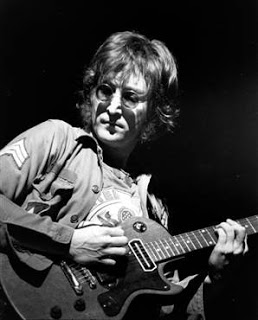 “Was that a jelly baby?”

Why did Lennon play live so rarely after the Beatles’ demise? Michael and Craig have made some interesting remarks about this question on the comments for the “Keep ‘Em Out / Let ‘Em In” post, which inspired me to remind myself of what Lennon himself said about the matter. This is a quote from a June 1975 interview:

“In ’72 it [government harassment] was really getting to me. Not only was I physically having to appear in court cases, it just seemed like a toothache that wouldn’t go away . . . There was a period when I was hangin’ out with a group called Elephant’s Memory. And I was ready to go on the road for pure fun. I didn’t want to go on the road for money. That was the time when I was standing up in the Apollo with a guitar at the Attica relatives’ benefit or ending up on stage at the John Sinclair rally. I felt like going on the road and playing music. And whatever excuse—charity or whatever—would have done me. But they kept pullin’ me back in court! I had the group hangin’ round, but finally I had to say, ‘Hey, you better get on with your lives.’ Now, the last thing on earth I want to do is perform. That’s a direct result of the immigration thing. In ’71, 1972, I wanted to go out and rock my balls off onstage and I just stopped.”

Impossible not to wonder what would have happened if the immigration issues could have been resolved and he’d gone on the road in the early 70s. But why did he feel he needed an “excuse” to perform? Maybe playing for money, or playing what an audience wanted to hear, seemed too close to the Beatles days.

“It’s fun with other people”

Here’s another quote, from December 6, 1980, in which John talks doing the “Rolling Stones’ Rock and Roll Circus” show in 1968. It too suggests that he could delight in live performance after the Beatles days:

” . . . actually the first time I performed without the Beatles for years was the Rock and Roll Circus, and it was great to be on stage with Eric [Clapton] and Keith Richard and a different noise coming out behind me, even though I was still singing and playing the same style. It was just a great experience. I thought, wow, it’s fun with other people.”

In the same December 6, 1980 Lennon describes the 1971 Fillmore East show he and Yoko did with the Mothers of Invention as “really heavy” and wonders how much the punk and New Wave movements in music stem from kids having seen that or a similar performance. (A lot of this show ended up on the “live jam” disc included as part of “Some Time In New York City.”)

All this really makes me wonder how the projected tour in support of “Double Fantasy” would have gone. Theoretically, at least, Lennon seems drawn to live performance, and in the 1975 interview he sounds frustrated by having lost the opportunity to tour in the early 70s. But how would it have felt for him onstage, playing songs like “Watching the Wheels”—a song about disengaging from entertainment and audience response? I don’t know, but I wish more than words can say that he (and we) had had a chance to find out.