From Faith Current: “The Divine Madness of Revolver” 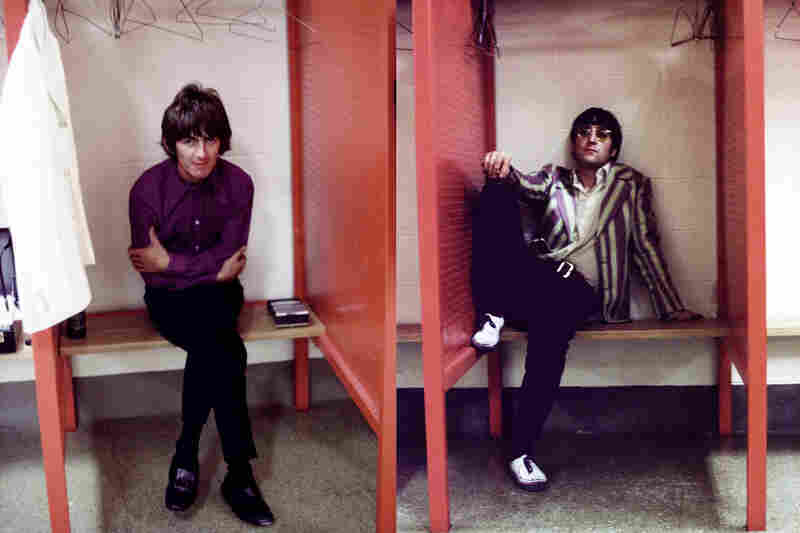 Large chunks of the Beatle catalog are so celebrated they’ve become hard to perceive. (Try writing about “Yesterday,” for example.) So when someone comes to me with a new angle, I immediately take notice. I find Faith’s vision of Revolver and Pepper as twins to be an interesting, challenging idea. I hope you agree. –MG

The greatest of blessings come to us through madness, when it is sent as a gift of the gods.” — Socrates

A little before midnight and I’m not sleeping. The edible from an hour ago is just starting to take effect. I slip out of bed, grab the headphones and–without fully thinking this through–press play on Revolver.

I’ve listened to Revolver many, many times, of course, but never like this–alone in the deep night on the edge of sleep, isolated by noise-canceling headphones and darkness, high on some particularly potent weed, at that still point where the veil between the worlds is hairline-thin.

In other words, precisely the way Revolver was meant to be listened to.

1…2…3…4…George’s voice slithers into my ears and the ride begins,“Taxman,” all rage and razor blades. “Eleanor Rigby,” and the strings curl their fingers around my throat and threaten oblivion. Paul seduces me with his silken obsession in “Here There & Everywhere” and how can I not surrender and then “She Said, She Said” and John’s right, I feel like I’ve never been born…“Good Morning Sunshine”’s subversive mania burns my feet as I touch the ground (why do people think this is a feel-good track??) and the situation isn’t helped at all by the crazy clown piano and backwards guitar of “I Want To Tell You”… Paul’s obsession crumbles into the disillusion of “For No One” which morphs into the stalker fantasy of “Got To Get You Into My Life.” (yes, it’s about drugs, but it’s also not about drugs). Then John pulls me under again and after that, there’s no oxygen, just surrendering to the void…

By “Tomorrow Never Knows,” consensual reality is a distant memory, just something I heard somebody talk about once. Whatever remains of “me” fragments, flesh and bone sinking through the bed and the floor into the frozen ground of an icy winter night, mind and spirit rising into the expanding firmament overhead, a white-hot cord of awareness connecting the two until I’m stretched across the universe, a meteor shower of splintered glass slicing into my consciousness, a million edges bleeding me into the arms of a feral and unforgiving God.

The rest of the night passes in a fever dream, restless, agitated, stalked by visions of sharp objects and chaos, swarming roaches of energy skittering under my skin and into my skull.

The morning after is no better. I can’t get it together. I mean, I really can’t get it together, “it” being my thoughts, my sense of self, my ability to function in whatever reality this purports to be. Nothing feels solid, nothing feels like it has to happen, not even breathing. Roach-like energy from the night before still crawls along my spine and into my hands. Movement is the only thing that relieves the feeling of being trapped in an electrical field. I wander through rooms, picking up random objects and setting them down again. I pick up my guitar, try to work on a song, but my fingers can’t find even the simplest chords. Everything sounds out of tune.

In need of something to tether me, I make coffee. Surprised by the concept of “hot,” I burn myself on the kettle. The pain shocks me into the moment, and I hold my hand under the kitchen tap. The cold water rakes over my fingers like Paul’s guitar solo on “Taxman.”

I’m used to the freaky aftereffects of alternative consciousness, something I’ve explored in various forms for years. I’ve had “good” trips and “bad” trips, with and without the assist of substances, but this is extreme and uncomfortable in a new and unsettling way.

I call a friend who’s conversant in altered states. She’s on west coast time, three hours earlier, but screw it.

“I need help,” I say when she answers, grouchy and sleepy. “I think the Beatles are driving me insane.”

The reaction I’m having is precisely the reaction that Revolver was intended to provoke. It comes with a warning label, after all. Right there In the title. 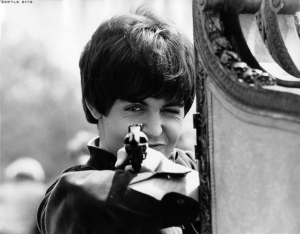 Most writers focus on a vague association with revolving turntables. The story changes every time it’s told. Guns are rarely mentioned, sometimes they’re specifically not mentioned and we believe this because we want to believe it, because most of us don’t like thinking of the Beatles in relationship to guns. (There are, BTW, a striking number of photos of the Beatles with guns.). But the thing is, when we use a word, we get all of its associations, not just the ones we like. The Beatles are world-class wordsmiths, and there is exactly zero chance that in 1966, three years after the Kennedy assassination, they don’t know that in America (their biggest market) ‘revolver’ doesn’t mean turntable. They are well aware that the music they’re about to release into the wild is dangerous.

From the start, the ‘66 tour is different. Darker, grimmer, spiked with paranoia and rage. History mostly remembers the Jesus comment, but that was just one piece of geographically-isolated shrapnel from the global detonation. Extremist protests and death threats in Japan, the Beatles under armed guard in their Tokyo hotel. International incidents and violence at the airport in the Philippines. In the American South, #TeamJesus burns records and the KKK threatens assassination. The Beatles are pelted with projectiles, including garbage, during concerts. In Cleveland, 2,000 fans break the barriers and riot. The band watches, helpless, as police bludgeon people with nightsticks, before being sequestered backstage till it’s safe to resume the show. This is the first time, but not the last, that Beatles fans get dangerously out of control. Stage invasions become the new normal. 7,000 people crash the barriers at Dodger Stadium, and again at Candlestick Park. In Memphis, Fundamentalist Christians protest outside the venue and a cherry bomb is thrown onstage. In an event only slightly less seismic, John Lennon apologizes, but not before openly weeping backstage before the press conference.

Through it all, Revolver is the soundtrack to the chaos.

We all know the ‘66 tour was like this, but we rarely talk about why. What was different this time?

Revolver is what was different.

Stay with me here. There’s precedent.

Audiences rioted at the premiere of Stravinsky’s Rite of Spring, the music of which was described at the time as “pounding with the rhythm of engines, whirls and spirals like screws and flywheels, grinds and shrieks like laboring metal.” (Rosenfeld, Musical Portraits, 1920). Sixty years later, a New York Times reviewer described Rite of Spring as “great crunching, snarling chords from the brass and thundering thumps from the timpani.” (NYT 3/23/84) Sound familiar?

Schoenberg’s 1913 “Skandalkonzert” (“scandal concert”) caused riots when audiences were overwhelmed by the experimental nature of the music. The play Ubu Roi by French writer Alfred Jarry, which helped to usher in surrealism at the turn of the 19th century, also drove audiences to violence. Michelangelo’s Pieta, Picasso’s Guernica, Rembrandt’s Night Watch, all vandalized by people driven over the edge by work that was more challenging than their psyches could handle. A year after Revolver, the violent outbursts directed towards Barnett Newman’s Who’s Afraid of Red, Yellow, and Blue III will become famous enough to spawn a documentary.

This is what happens when art is too far ahead of its time, when people aren’t ready for it.

The Beatles aren’t performing cuts from Revolver in their live shows, but the album is piped in on the sound system before their concerts, stays at #1 for the duration of the tour, bleeds into people’s heads throughout that long, unusually hot summer of ‘66. Grinds and shrieks and great crunching snarling chords crawl into and out of ears, just as Klaus Voorman’s cover art presages that it will.

A lot of people go a little mad. A lot of people spend more time going a little mad than actually listening to the music. Revolver tops the charts, but it doesn’t stay there quite as long as expected, doesn’t sell quite as well as it should, despite (because of) its unprecedented, revolutionary sound.

The Beatles go a little mad, too, though for them it translates not into destruction, but into finally being so extremely done with the bullshit that they can’t take it anymore. Leaving Candlestick Park, locked away in their armored truck, even Paul decides enough is enough. When Paul McCartney is fed up with live performance, you know it’s the end times.

Even before the ‘66 Tour From Hell, madness is on the Beatles’ minds, which is how Revolver gets recorded in the first place. The chains may have come off in the studio, but the chains of being Beatles are digging hard into their skin. Having realized their wildest teenage fantasies, they’re chafing at their mop-top image and the limitations imposed by touring, creatively restless and tripping on pot and LSD, straining against the suffocating restrictions of their off-the-charts fame, and things need to change, like, yesterday.

Their first shot across the bow is “the butcher cover,” but that’s not nearly enough and anyway, they’re forced by their American label to backpedal. Their manifesto of discontent will have to be delivered through the music, of course, and it is. With a vengeance.

Revolver is all about the madness of confinement. It’s the Beatles tearing at their perfectly tailored Pierre Cardin straitjackets, scraping their bloodied fingernails over the steel walls of their armored truck after performing behind a wire barricade for 50,000 shrieking fans. It’s the Beatles, ready and willing to gnaw their feet off to escape from the trap.

You want to drive us mad? they snarl. You want to confine us? Fuck you, here’s what confinement feels like. See how you like it for a change.

Track by track, they try every escape available to them. John tries to sleep and argue his way out. George tries philosophizing. Ringo tries disappearing into an alternate universe, making the best of being trapped in an enclosed space with a bunch of lunatics (as he’ll do again on Abbey Road). Doctor Robert and his cocktail of oblivion can’t help. Neither can fame, fortune or green birds, whatever those are. Even a forced march into the blinding sunshine of the asylum’s exercise yard offers but a temporary reprieve and only results in scorched feet. And were there ever two people more trapped in the madness of confinement than Eleanor Rigby and Father McKenzie? Paul almost makes it out–for a heady moment, he thinks romantic obsession will set him free or at least offer a more comfortable kind of confinement, but love (or lust, it’s so hard to tell with Paul…) turns out to be just as claustrophobic as the cell he’s trying to escape. It’s one of those horror movie mazes where no matter what they try, they always end up back where they started. They’re The Beatles and there is no escape. No one will be saved.

By December, the Great Global Revolver Freak-Out is over. The Beatles have freed themselves from the restraints of touring, but they’re still confined — this time in the studio and this time, voluntarily. They have unfinished business with us.

Part 2…. in which this last sentence is unpacked in detail… is right here.

Meanwhile, for further reading, I recommend the book “Beatles ‘66’ by Steve Turner, as well as Hey Dullblog contributor Devin McKinney’s excellent chapter on Revolver in his book Magic Circles.

The Beatles are a threat to our children, especially girls (August 1964)

All Hail the Rutles!