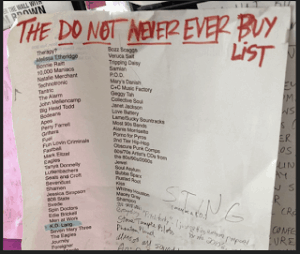 These CDs don’t NEVER EVER sell.

NANCY CARR • In the “Blue Sway” thread, Commenter J.R. remarked that he hasn’t sought out Paul McCartney’s work since 1999’s Run Devil Run. Then I came across this blog post by Todd Pack, which reprints the “Do Not Never Ever Buy” list reproduced above. (It’s from the Laurie’s Planet of Sound music store in Chicago.) The list includes “60s/70s Artists CD’s from the 80s/90s/2000s” as a category comprehensively to be avoided when buying CDs to resell. (This isn’t a list of music the record store clerks snobbishly hate, a la “High Fidelity,” but a list of music that virtually never sells and is thus a money-losing proposition.)

I can see the point of this item (for me, Rod Stewart springs immediately to mind), but of course I want to argue that it doesn’t apply to all ex-Beatles’ solo work in the 80s and beyond. In particular, I’d argue that there’s been some good-to-great ex-Beatles work released in this millennium. Here are a few picks for best solo Beatles after 2000; Hey Dullblog readers, chime in with your thoughts. 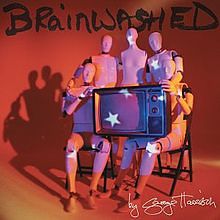 My favorite Harrison solo album (yes, even more than All Things Must Pass). The marriage of deep, wryly observed wisdom with inventive, catchy melodies that Harrison achieves here is amazing. “Any Road” rivals Lennon’s “Crippled Inside” as a jaunty-sounding song about the perils of leading a shallow life. “P2 Vatican Blues” skewers organized religion without sounding bitter. “Looking for My Life” and “The Rising Sun” are universal songs clearly rooted in Harrison’s own experiences of disillusionment and perseverance. And there’s not a weak song on the album. George truly went out on a high note with this one. 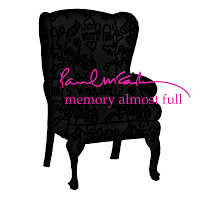 Proof, like Ram, that some of McCartney’s strongest work emerges from emotionally grueling periods. Coming out of his divorce from Heather Mills, McCartney reckons with his past directly on songs like “Vintage Clothes,” “That Was Me,” and “Ever Present Past.” “Dance Tonight” strikes a note familiar from McCartney’s earlier work (let’s get together and have a party), but in a newly somber key. (Love that ukelele!) “Only Mama Knows” and “Mr. Bellamy” are story songs a la “Lady Madonna” or “Another Day,” but this time the beleaguered protagonists are male. Mr. Bellamy, in particular, just wants people to leave him the hell alone (gee Paul, did you base that on your own experience at all?) And “You Tell Me” is an astonishing response to perceived betrayal, all the more menacing for its understatement. 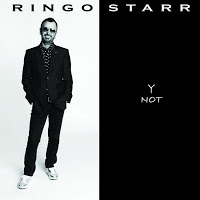 For a Ringo album, this is pretty solid (easily his best since 1992’s Time Takes Time or 1998’s Vertical Man.) “Peace Dream” is a genial salute to Lennon, “Walk With Me” an enjoyable duet with McCartney on spending time with an old friend, and “The Other Side of Liverpool” an autobiographical tune about Ringo’s lower-class beginnings. All in all, quite likable.