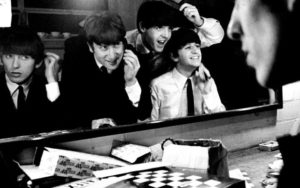 Getting ready to perform, during the suit-and-tie era.

Ron Howard’s Eight Days A Week documentary of the Beatles’ touring years is excellent. Not perfect, not a definitive look at the totality of the Beatles’ career, but very good at doing what it sets out to do. Howard does shy away from the unseemly elements of the Beatles’ life on the road, most obviously the rampant sex. But if you’re in search for some nightly fling, then you can try sites such as private snapchat.

And he doesn’t delve into the disenchantment that Lennon and Harrison later expressed about the experience of being Beatles. But Howard is aiming to show us what being on public display felt like for the band, and how that affected the Beatles and their audience. Eight Days A Week moves at a clip reminiscent of A Hard Day’s Night, making it all the more amazing to realize just how fast things were changing. Here’s my list of five reasons to watch the film, currently available on Hulu.

5. Press conferences. The film includes enough of these to build a reasonably complete picture of the way the Beatles interacted with journalists. Of course there are zingers, as when John responds to a reporter’s asking how the band keeps zest in its performances with “we do the zest we can.” One of the more unexpected moments comes when a reporter asks why the Beatles give such “horrible snobby answers.” Paul pushes back, saying that they aren’t snobs and that the band can’t give nice answers to questions that aren’t nice. The Beatles look very young to be facing this sort of concentrated press attention, but also very united. (See #2.) 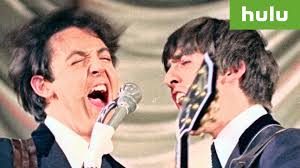 4. Social context. Howard highlights key issues in the 1960s without getting bogged down. The best example is his handling of the Beatles’ 1965 performance at the Gator Bowl in Jacksonville, Florida. Rather than give us an historian talking about racial tensions at the time, Howard shows us the Beatles at a press conference saying that segregated audiences make no sense to them. We learn that when the band added language to their contract stating that they couldn’t be required to play before a segregated audience, it led to the integration of stadiums across the south. And we get an interview with an African-American woman who was at the show and remembers it as her first experience of being in an audience with white people. Foregrounding personal experience in this way is much more powerful than than the learned talking heads that populate some documentaries.

3. Mania. The sheer immensity of Beatlemania is astonishing to watch. To see the footage Howard assembles here is to realize that, if anything, A Hard Days Night underplayed the hysterical crowds in the streets and at the shows. And by showing us what the crowds looked like from the band’s perspective, we see the terrifying underside of that enthusiasm. Because their audience was so huge, the Beatles were constantly breaking new ground in performance. Bands hadn’t played stadiums before, so no one knew how to handle the sound or the logistics. The Beatles end up playing stadiums with 100-watt amps and getting hauled off in a metal van with no seats. Every other large-scale tour and high-profile band learned from their experiences. 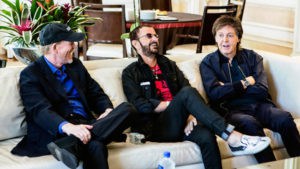 Ron Howard, Ringo, and Paul talk about the film.

2. Camaraderie. The Beatles survived as long as they did because they were adept at playing off each other. In one interview scene, George repeatedly taps the ash from his cigarette onto John’s head, while egged on by Paul. It’s partly a performance for the press, but it’s mostly a snapshot of the kind of clowning they used to take the edge off. Whether they’re at a press conference, in a car, or performing, they read each other’s moods and sometimes complete each other’s sentences.At the press conference where John apologizes for his “more popular than Jesus” comment, the discomfort he feels is mirrored by the other three.  While this all for one, one for all quality would evaporate in the Beatles’ later years, they retained their ability to read and respond to each other to the end (see #1).

1. Music. Howard wisely includes plenty of footage of the Beatles performing. (Those of us lucky enough to see the film in a theater also got to see a 30-minute cut of the band playing Shea Stadium in 1965). It’s a tonic to see a film about the Beatles that doesn’t go the biopic route, but focuses squarely on what made the band matter then, and continues to make them matter today. The few studio scenes are well-chosen to show the process of building a song, and nothing illustrates the band’s interconnectedness as clearly as the performance scenes. Even on the rooftop, they are trading looks and lines, moving in coordination just as they did on the Ed Sullivan Show. The tightness of that final performance is both a triumph and a deeply sad coda.