Why Your Favorite Celebrity Isn’t Who You Think They Are 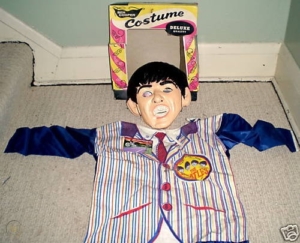 “This Halloween, go as one of the biggest bastards on Earth!”

Folks, just a quick post here but one I think is worth making.

In the comments to my 80th birthday post for John Lennon, we’re talking about John’s bad behavior (specifically his abuse of women–and men, too, though that is mentioned less). It’s come up several times, and indeed the original post mentions that younger fans don’t connect with John because they think he was a hypocritical asshole.

Can’t argue with that; “All You Need Is Love” does sound different coming out of the mouth of a “hitter.” But I don’t think the latter invalidates the former, and it’s that tension that, to me at least, makes Lennon so remarkable. He’s encompasses both things, good and bad, aspiration and reality, and in doing so is actually a better role model in certain ways. Not a saint.

But there’s another point to be made: celebrities today are no better, no less hypocritical, than Lennon. They cannot be, for two reasons.

First: the type of person who wants to become a celebrity is predisposed in certain ways. They are ambitious, which is to say fundamentally dissatisfied with their lot in life, and the world around them. Is this a form of anger? Probably; but even if it’s not exactly anger, it’s close enough. Add to this the process by which one becomes a celebrity—the process of climbing up the greasy pole—which encourages the worse aspects of one’s character at the expense of the better. So: anger, plus immorality.

If you give a person like that huge amounts of money, fame and power, bad things ensue.

This is what Lennon was getting at when he called The Beatles “the biggest bastards on Earth.” All four of them were ambitious—infernally so. Even the ones who seemed “nice”—I’m looking at you, Paul—were ready to knife their own grandmothers to get what they wanted. This is why, as he said so many times, Paul was content to be “second banana”—this position allowed him to be the nice guy, the smoother-over, because the others (Lennon particularly) were doing the dirty work. And public perception of Paul as “the nice guy” was bound to rankle the others, because they knew that, in private, he was as Machiavellian as the rest of them.

A furious ambition gets you in the door, then the real hardening process begins; little by little, you are asked to do things for your career that you know you shouldn’t, or know you wouldn’t under normal circumstances. And once this behavior becomes a habit, it gets easier. So that by the year 1969, The Beatles were all completely compromised, mostly adrift. This is probably why John, George, and Ringo couldn’t see Klein’s bad intent. When you hang out with sleazebags, eventually everybody seems like a sleazebag, including yourself—which is to say, do what you want, what does it matter?

The process of becoming rich and famous has not become cleaner in the last 50 years. Every generation thinks that it has, though—that its heroes are morally better, or at least more honest or transparent, than the ones that came before. This prejudice began in earnest in the 60s, with our very own Beatles, and it has only strengthened today. John Lennon did more than anybody to accelerate this idea, by sharing himself warts and all. (Of course he didn’t, not really; it was still a performance—but it seemed real, and that’s what made it powerful.) In fact, you can make an argument that John Lennon was the first modern celebrity, in that he seemed to give fans access to his innermost secrets.

This, plus social media, is the entirely of our current culture. Celebrity has eaten everything, from showbiz to politics to academia; and the Lennon ethos of celebrity dominates. This is why Trump’s “grab ’em by the pussy” didn’t faze his supporters; it didn’t repulse them, it was an exciting glimpse into the real life of their chosen guy. And as the PR game has changed from maintaining a squeaky-clean image to one of controlled releases, the relationship of celebrity to right-and-wrong has gotten a lot more subtle. Fans need to realize that.

It’s very important that we begin to rebuild the character of our culture, and judging Lennon harshly for beating up women (and men) is not only appropriate but a good thing. The only caveat I’d add would be: your favorite celebrity is no better. They cannot be. They are a product of a process. Judge the person, surely, but also know the process for what it is. Ask me how I know. 🙂

But Paul Is My Favorite Beatle