So the redoubtable Nancy and I are planning to meet up at Beatlefest Chicago tomorrow. Nancy’s daughter is also coming. I am not at all sure she realizes what she’s in for, so pray for her.

You should go, if you can. The Chicago Fest is a great one (never been to NYC, plan on changing that). On top of all the Beatley goodness, the Fest for Beatles Fans is always a hell of a time-machine: nothing evokes the heady mix of bewildered hope, outsized ambition and creeping angst that was Mike Gerber’s teenage years, quite like the faintly mildewy conference halls of Chicago’s O’Hare Hilton.

Any of you who are planning to go and would like to say hello, send an email through the site. I’ll be checking my phone throughout the day.

Now for something completely different, sent over Dullblog’s transom this morning by beloved commenter Karen: 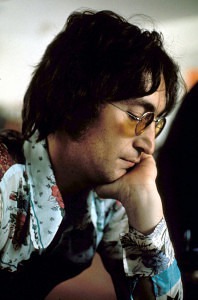 A nice, much earlier, shot from Beatles Photo Blog.

“When Paul contacted Yoko and asked her if John had any unpublished material they could use for Anthology, she gave him some cassette tapes John recorded at the Dakota during the last year of his life. As the story goes, at least one of the tapes had a note attached to it. Written on the note, ostensibly in John’s handwriting, were the words ‘for Paul.’ The song was ‘Now and Then.’

The note could have been written by Yoko herself, as one would do as a reminder/instruction to an assistant, etc. If it WAS written by John, was it further to a possible recording date that never happened?”

I know what I think — as I’ve said for years, I bet there would’ve been new Beatles stuff or at least new John and Paul stuff in the early 80s, after John and Yoko went to England, and then finished touring on Double Fantasy/Milk and Honey. But what do you all think?

The Future of Beatlefest