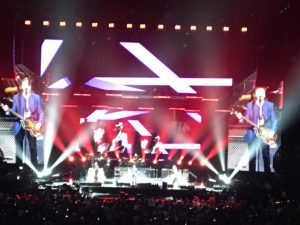 My view from the cheap(ish) seats.

Paul McCartney opened Sacramento’s Golden 1 Center on October 4 the same way he closed down Candlestick Park two years ago – with a nonstop volley of songs. The opening chord of “A Hard Day’s Night” sounded, and tens of thousands of fans started screaming. The overall mood, though decidedly more decorous than the heyday of Beatlemania, was reminiscent of it. And as has become usual during the past few years, McCartney basked in it, drew energy from it, and played a nearly 3-hour set that included 38 songs.

Most of the songs and anecdotes are familiar to those who’ve seen his recent shows, as McCartney acknowledges in a recent Rolling Stone interview.  He says that keeping much of the show the same is a way to meet the expectations of those who haven’t seen him perform before, while giving the established audience what he knows they like.

But I suspect that the familiarity is both practical (it’s a lot of work to rehearse and produce a show like this) and also an emotional safety net for McCartney. Having specific moments in the show to recognize Lennon, Harrison, and Linda enables him to honor them and to draw a

boundary around their memories, at least for the duration of the show. He’s similarly invested in name-checking his wife Nancy – in both McCartney shows I’ve seen this year he’s pointed out that “she’s here tonight.” I get the sense that being Paul McCartney onstage can feel lonely and a bit overwhelming, and that it takes a number of elements — his band, the consistent stage set up, the well-rehearsed set list, the carefully placed call-outs – to provide enough emotional security for him to perform as much and as well as he does.

And he does perform well. I continue to be amazed that he plays for so long without a break, switching from bass to guitar to piano and back, while singing creditably throughout. His voice has weathered and lowered, but it’s still strong. And he’s still clearly getting a kick out of what he’s doing. During the closing “Abbey Road” medley, after the line “Are you gonna be in my dreams tonight?” he turned to the audience and yelled “Well, ARE ya?” in a tone that made him sound 25 again.

Over the years, one reason he’s been branded uncool is his eagerness to please, his concern for what the audience thinks. While he’s certainly done plenty of uncommerical projects (“Thrillington,” the first two Fireman albums, “Liverpool Sound Collage,” etc.) he’s never disdained the crowd. At this show, after doing “Queenie Eye,” McCartney made it clear that he gauges audience response carefully:

“You know, I can tell which songs you like. When we do a Beatles song, all the phones come out. It’s like the galaxy lights up. And when we do a song you don’t know, it’s like a black hole. Well, here’s another black hole!” And he proceeded to do “New.” 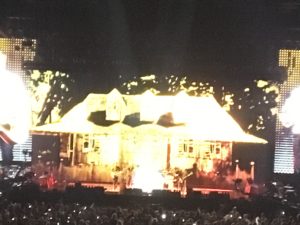 One of the sets was this convincing-looking house.

It’s that kind of moment that makes me love McCartney. He cares – he can’t help but care – that his later music can never be as beloved as the Beatles’ legacy. But he acknowledges that wryly and keeps on putting the new stuff out there. I think it’s great that he’s doing “FourFiveSeconds” at shows even though plenty of people in the audience have probably never heard it. And I really like his version of the song.

Near the show’s end, McCartney brought on stage some audience members who’d been holding up signs, and this night had a “Three Ages of Woman” feel. A 30-something daughter had been holding up a sign proclaiming her mother’s love for Paul, and he gave them both a squeeze. A 20-something woman’s sign declared “I’ll still love you in 50 years, when I’m 64.” McCartney responded with a deadpan “I don’t know if I can wait that long.” Finally, a girl whose sign read “I’m 12 and I want to hold your hand” came up (with her mom), and cried heartily as Paul held her hand and hugged her. (The link includes a video of the encounter.)

It’s that kind of moment that makes some people dislike McCartney. It can seem twee and definitely not rock-n-roll. (I can’t imagine Mick Jagger, for instance, hugging a 12-year-old girl onstage — and if he did, it would definitely have a different feel). But I like the way McCartney has embraced the multigenerational audience of his shows, and publicly inhabits the fatherly/grandfatherly role that’s such an important part of his life.

McCartney and Starr on Orlando attack