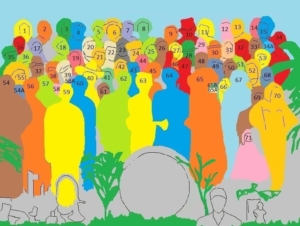 Who’s Who (not shown: The Who)

Longtime readers of this blog know that I maintain it simply as an excuse to avoid grown-up work. And also, that I love Sgt. Pepper. It is my single desert island disc, as pedestrian as that choice is, because to me, Pepper contains so much more time than any other Beatles record.

What do I mean? (When you have to type that sentence in an piece of prose, you know you’re fucking the writing up.—Ed.) Well, one of the things that I love most about Pepper—almost as much as the music—is how it intentionally places The Beatles in a canon, and not one impressed upon them by an academic, but one they chose. Legal issues and Peter Blake’s fill-ins aside, the lineup of people on the cover of Sgt. Pepper is (mostly) a glimpse inside the heads of John, Paul, George and Ringo as of early 1967—who they admired, who they competed against, who they aspired to be.

That’s a level of artistic self-awareness and overt ambition that no other person in their field—not Dylan, not Brian Wilson, not the Stones—had ever demonstrated publicly. I mean, for all the gorgeosity of Pet Sounds, the cover has the guy who did all the work, surrounded by his backing band, feeding a bunch of goats. It looks like something picked by a Capitol publicist—like the cover of Yesterday and Today. Like the cover of Revolver, the cover of Blonde on Blonde is a step up from that; it does fill out an aspect of the artistic statement. But that’s not what The Beatles are doing on the cover of Pepper. They are throwing down a gauntlet—“Judge us”—and coming through that judgment with flying colors. Their confidence, which could’ve easily come off as hubris, was vindicated within hours of the LP dropping.

They are also creating a community of the blessed, which they are clearly members of themselves. When we see Lewis Carroll on the cover, we recognize that Pepper has been just as influential, just as epochal in its field as Alice in Wonderland. When we see T.E. Lawrence, we recognize that John, Paul, George and Ringo were and are Great British Heroes, as well, living on 50 years after their days of glory. When we see a guru, we realize—even if we don’t know that guru!—that The Beatles exerted a spiritual power then, and do so today.

This is why, to me, Pepper stands head and shoulders above the other great Beatles albums, some of which you might argue contain better songs than Pepper does. Pepper is a complete artistic statement, an entire of world-creation that required breathtaking confidence; and they pulled it off. They aimed as high as they could imagine—and hit the mark. No other Beatles LP tries to do what Pepper does, much less succeeds at it. Revolver, Abbey Road, White—these are great albums, and the greatness of their songs does combine to create a psychological location, a place to experience, leave and return to; but none of them are as intentional, or as powerful, in this as Pepper.

The cover of Sgt Pepper—the first thing a person encounters—declares confidently, “We are great; as great as any of these people from history. We acknowledge our friends and influences at this moment of our greatness. We say to our rivals: this is the standard. And we do all this with our typical sardonic, self-deprecating humor, dressed up silly, holding instruments we can’t really play, flanked by waxworks.”

So I really enjoyed this site, which goes person-by-person, giving capsule bios and reproducing the exact celebrity photo that was used on the cover. I think you will enjoy it, too. But don’t click the link unless you have time to burn, and/or grown-up work to avoid.

Sgt. Pepper in the Age of Social Distancing