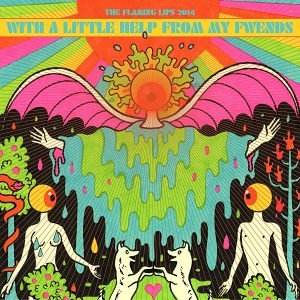 Watch up for that blue goo–it really gums up the songs.

NANCY CARR * With a Little Help from My Fwends, the Sgt. Pepper’s tribute album from the Flaming Lips and a bunch of their buddies, is a frequently painful listening experience that is also revelatory. It’s just that much of what it reveals leads to depressing conclusions about how the 21st century is shaping up.

This is a true cover album, in the sense that Booker T. and the MG’s McLemore Avenue is, and that Mojo magazine compilations of various people doing songs from Revolver or Yellow Submarine aren’t. That is, it represents a genuine effort to reimagine the work and stamp it with a new personality. And if there’s one thing With a Little Help from My Fwends is, it’s of its time; the spine of the album appropriately puts “2014” next to the title. The album’s keynotes are fragmentation and dissonance, both within songs and between them, producing an effect quite different from the musical variety of the Beatles’ album. By my count, three songs rise above the often gimmicky technological effects that gum up the works and achieve emotional resonance. As a whole, though, the album replaces the Beatles’ (tragically naïve) faith in the transformative power of drugs with mere trippiness, and their (sometimes satirical, sometimes sympathetic) engagement with the world with cynical weariness. I was only one year old when Sgt. Pepper’s came out, but listening to With a Little Help from My Fwends the sense of loss I feel for what was imaginable at that time is personal.

You know the worst of what you’re in for from the start, at least: “Sgt. Pepper’s Lonely Hearts Club Band,” and especially “With a Little Help from My Friends” are a hot mess. Both songs credit three artists or groups, and both suffer from throw-everything-at-the-wall syndrome. The opening track leaches all the power out of the original by largely dropping out the rhythm section, changing tempo repeatedly, and drowning the ending in a guitar solo by J. Mascis that is mixed up so high it leaps out the way cheap commercials go up in volume during TV shows. “With a Little Help from My Friends” is aggressively unlistenable. It sounds like a parody to me, but one without a clear point. It kicks off with a messy, overlong drum solo, and the vocals are literally all over the place—alternately strident, deliberately out of tune, and so processed they sound robotic (there will be way too much of this last later in the album).

Yet this track is the key to the album’s strength, as well as its weakness. The Lips and friends here serve notice that this won’t be a forgettable by-the-numbers cover version, like Cheap Trick’s Sgt. Pepper’s Live; it will show artists’ genuine responses to the Beatles’ songs. Thus I believe the mess of “With a Little Help from my Friends” points to acute discomfort with the vulnerability and hope that underlies the song. The Beatles’ original is both a tongue-in-cheek salute to the music hall tradition and a sincere statement about friendship, thanks largely to Ringo’s lead vocals and the band’s call and response with him. What With a Little Help from my Fwends as a whole ends up demonstrating most powerfully is that the delicate balance of humor, optimism, realism, and empathy that shaped “Sgt. Pepper’s” is impossible to recapture in the 21st century.

But boy, does this album turn the trippiness up all the way up to 11. “Fixing a Hole” by the Electric Wurms and “Within You Without You” by Birdflower, the Flaming Lips, and Pitchwafuzz are convincing musical acid trips. “Lucy in the Sky with Diamonds,” by The Flaming Lips, Miley Cyrus, and Moby, manages to combine trippiness with emotional power, mainly because the arrangement stays rather closer to the Beatles’ original and the vocals are not as overprocessed as elsewhere. On the other hand, “Being for the Benefit of Mr. Kite!”, by The Flaming Lips, MJ Keenan, Puscifer and Sunbears, feels simply disjointed and tedious.

“She’s Leaving Home,” by Phantogram, Julianna Barwick, and Spaceface, marries 1980s-style electronics, including drum machine effects, to a lead vocal that retains the human investment of Beatles’ version. This is a cover that sets its own terms but also relates meaningfully to the original, a distinction shared on this album by “Lucy in the Sky with Diamonds” and “A Day in the Life.” By way of contrast, “When I’m Sixty-Four,” by Def Rain, The Flaming Lips, and Pitchwafuzz, is an unmitigated disaster. Most of the vocals sound like they’ve been filtered through a 1980s Vocoder (remember those?), and the instrumentation is so heavy on bloops and bleeps that it sounds like the track was recorded at that cantina in the original Star Wars. The whole has all the feeling and humor of the automated voice you get when you call information.

“A Day in the Life,” by the Flaming Lips, Miley Cyrus, and New Fumes, is, like “Lucy in the Sky with Diamonds,” a version that hews more closely to the Beatles’ original; the changes it does introduce, of tempo, instrumentation, and vocal inflection, work with the elements of that original rather than fighting with them. It’s not accidental that Coyne and Cyrus are the singers on both songs: along with Julianna Barwick on “She’s Leaving Home,” they’re the best vocalists on the album.

For me the album’s most telling moment is the end of “A Day in the Life.” The music stops abruptly, there’s a second or so of (to me at least) unintelligible talk from Cyrus, and that’s it. On “Sgt. Pepper’s” the Beatles famously used the studio itself as their instrument; on “With a Little Help from my Fwends” the Lips and Co. use much more advanced musical technology to achieve far less. It’s fitting that the album ends not with the Beatles’ bang but with a whimper. But an honest whimper, be it noted.

One thing listening to “With a Little Help from My Fwends” did for me was enhance my appreciation of the talents of Lennon, McCartney, Harrison, and Starr, as well as of George Martin and Geoff Emerick. First, the singing: no one on “Fwends” comes anywhere near the beauty and depth of Lennon’s singing, and it’s telling that the most powerful songs on it retain his vocal touches (the “bye bye” at the end of “She’s Leaving Home,” the intonation of “Oh boy” on “A Day in the Life.”) No one matches McCartney’s singing on the album, either: not his punch (the triumphant soaring of the chorus of “Lucy in the Sky with Diamonds”) or his cheeky humor (“Lovely Rita”). And there are no harmonies on the album worthy to set beside Lennon’s and McCartney’s.

As for the rhythm section, it’s mostly minimal, electronic, or buried way down in the mix on Fwends, which makes re-listening to “Sgt. Pepper’s Lonely Hearts Club Band” an absolute revelation. It’s McCartney’s muscular, melodic bass work and Starr’s steady beat and inventive fills that propel the album and give it its kick. The cymbals and rat-a-tat drumming on “Mr. Kite!” and the three bass drum beats before the first chorus of “Lucy in the Sky with Diamonds” make those songs in ways I never fully recognized before. And McCartney’s work on bass throughout the album is crucial to its sound: his lines are always percolating beneath the surface, adding body, melodic interest, and momentum.

Finally, Harrison’s respect for Indian instrumentation and earnest spiritual seeking imbue his version of “Within You and Without You” with a piercing sincerity that shames the cover on Fwends. And George Martin’s arranging/producing work, along with Geoff Emerick’s engineering chops, make every part of the original album sound inevitable and perfectly placed. Sometimes, as Joni Mitchell put it, you don’t know what you’ve got til its gone.