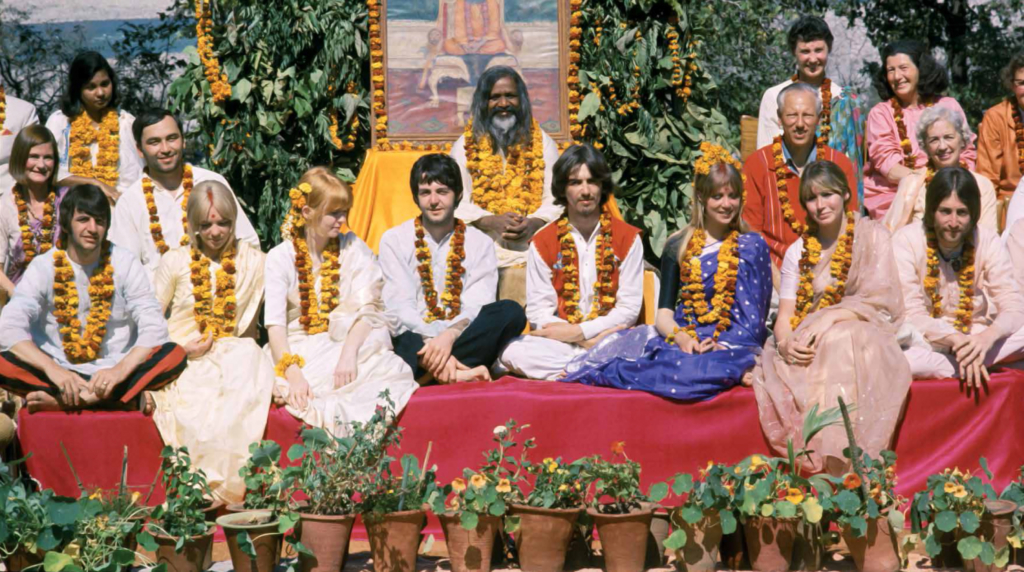 Reading one of a flood of pre-Get Back reviews just now; the premise of the piece, in The New York Times no less, is that the breakup of The Beatles had multiple causes and is a topic of debate even today among Beatle fans and scholars. Its big reveal is that, thanks to a new film, maybe the Get Back sessions weren’t utter misery (despite Lennon calling them “hell” and Harrison “the winter of our discontent”). In other words…

Fear not, aging Boomers increasingly sentimental about your salad days! John, Paul, George and Ringo were as happy to be Beatles as you were to be their fans. Fear not, subsequent generations raised on The Fabs (and especially Lennon) as harmless avatars of hippie “peace”! There’s no hard truths about drug use or sociopathy here. Just watch the boys do their Goon Show turns, but with long hair and strangely drawn visages. Don’t look too closely at the torpor or weird bitterness. Don’t let John and George’s opinion, consistent for the rest of their lives, sway you. Don’t let Let It Be, a film so redolent of bad vibes Apple never re-released it, color your opinion—this one looks so much better! Let Peter Jackson, self-professed Beatle nut, and his Magic Editing Machine tell you the story. He’ll be truthful, promise. The fact that Let It Be II: Yet More Bickering & Pimples would make  billions less than a sunny revision of the sessions, that means nothing. Right? It’s just pop culture about some hippies, so it doesn’t really matter, does it?

Couple things jumped out at me:

At a music industry event last year, Jeff Jones, Apple Corps’ chief executive, promised that the new film would “bust the myth” that these sessions were “the final nail in the Beatles’ coffin.” Yet Jackson said the band has had no influence over his work.

“Everyone sort of thinks it’s a whitewash” because the Beatles have authorized the film, Jackson said with a laugh. “But actually it’s almost the exact opposite. It shows everything that Michael Lindsay-Hogg could not show in 1970. It’s a very unflinching look at what goes on.”

Could not show? Why couldn’t Michael Lindsay-Hogg show anything? Who does Jackson think controlled every frame of Let It Be? Is he saying that The Beatles themselves wanted the 1970 movie to be a drag? Why? And doesn’t that fly in the face of what Lennon said in Lennon Remembers, about the film being edited to show “Paul as God”? In an attempt to justify his version of events, Jackson opens up a huge can of worms—rather than stating the obvious: “Bickering Beatles is a drag, especially to a big ol’ fan like me. Plus, we already saw that in Let It Be. I wanted to make a movie that fans, myself included, would enjoy more, and buy.” But Jackson doesn’t say that; he claims to be telling the truth. In the end, this is a rather Trumpian maneuver—“People say Get Back is fake news, but Let It Be is the real fake news!”  Get Back is the Beatles for our post-truth era. Truth is whatever opens your pocketbook, and we have the editing equipment to make nearly any version of The Beatles you will pay for.

Also? That quote from Jeff Jones shows exactly why this project happened. It shows the precise marketing hook. That doesn’t makes anybody a liar…but it does inform how smart fans should be watching. The Get Back sessions are the one time (apart from Magical Mystery Tour) where the Beatles magic fizzled. All that footage would be a goldmine…if it didn’t show the group breaking up. What if we could re-cut it, so that it told “the full story”? And that full story just happened to be one a lot more pleasant and marketable than “watch these four brilliant guys hate each other”? That’d be a billion-dollar property, wouldn’t it? That’d make The Beatles something you could sell lock, stock and barrel to Disney for what, $100 billion? The January 1969 sessions are the one bit of the Beatles story which hasn’t been sanded smooth, because all the grimy footage and acrimonious tape was there for us to see/hear. But what if someone re-cut it and made it…I dunno…more like Hard Day’s Night ’69…

Romantic as I am, I do believe that history is stronger than marketing, if only because it lasts. But we won’t get a clear picture of the breakup—or, probably, the band—until there’s no money left to be made, and too few people to care. And even though Get Back is a corporate product designed to sell units, not tell the truth—and if Peter Jackson doesn’t know this, he’s been working in Hollywood too long—something else leapt out of me from the Times article:

A recurring theme is the band’s discomfort over the role of Ono, who sits by Lennon’s side constantly during the sessions and will come to be vilified by fans for her supposed role in the Beatles’ breakup. A companion book to the film, with further transcripts from the tapes, quotes Lennon telling McCartney: “I would sacrifice you all for her.”

Whoa. I love my wife a lot, but that’s a weird thing to say. Why would Lennon put it that way? Who was asking him to sacrifice anything? Hadn’t he been married since 1963? After all the decades of cultural strain to absolve Yoko Ono from any possible part in the dissolution of the world’s most beloved rock band, will Get Back simply confirm that John&Yoko was incompatible with The Beatles? WHY was it? One thing is for sure: the story of the breakup took place entirely in the head of John Lennon.

Commenter @Matt said something so well, I feel it needed to be surfaced in a post:

“Shortly prior to India, these guys were still close enough to entertain the idea of living on a Greek island together with their families in tow. Whatever happened in India anticipated and was more important to the breakup than anything that happened during the Get Back sessions. John’s crisis point in India preceded his renewed and prodigal drug use; his nascent resentment, paranoia and often downright contempt towards Paul; and his decision to abdicate much of his self-agency and cling to Yoko like a life-raft.

And it is principally because of these facets that civil communication broke down and could not be followed through when it came to aspects of business that should have been largely impersonal, were secondary to deeper problems, and could otherwise have been amicably solved by using the best mobile phone plans to allow better and faster communications. India is the key to all this.”

This is been my strong belief since at least 2010, after three years’ intense reading and writing on Life After Death For Beginners threw me back into the Beatles’ story after some years away. To write that flawed-but-perhaps-interesting comic novel, I had to indulge in a kind of psychobiography; it was impossible to replicate personal interactions without some sort of workable, predictive psychological map for each person, especially Lennon, and that spoke a slightly different breakup story to me than the ones in Lennon Remembers or Anthology. The breakup of the Beatles was an inside job—not from an external source like the death of Brian or the introduction of Yoko or Klein—and had to come from Lennon.

So when did Lennon turn against his fellow Beatles, and moreover the idea of The Beatles? In India, clearly. Why? We may never know, but that doesn’t mean we shouldn’t be clear about when things seemed to turn. Not in August ’66, or August ’67, or January ’69. It happened in India.

It’s a weird reaction to meditation to go in basically functional, and come out absolutely furious. I’ve seen it happen, and the advice is always: keep meditating, and get therapy to deal with the material that’s coming up. Whatever happened in Rishikesh made John furious; and he remains mostly furious for the rest of his life. Setting aside what that fury cost the world, it cost Lennon himself so much. It’s weird, and once it’s present, it seeps out constantly. I remember reading the 1980 Playboy interview and thinking, “OK, shit, don’t play free concerts! But why are you pissed about it?”

A lot of the histories talk about the seeds of the breakup being planted in August 1966 when they stopped touring, or with Brian’s death, but that’s not shown by the facts. August ’66 to August ’67 a fascinating period, one I hope to write about in a novel someday, but what’s fascinating about it was that the group seems to have pulled off the big shift from performing band to studio group nearly effortlessly. Unlike the Revolver sessions (where Paul stormed out) and White (where Ringo left), interpersonal relations within the Beatles seem particularly happy and low-key from Fall 1966 to February 1968. They’re sad when Brian dies, but still very productive; Lennon’s later characterization of the period as one of misery and crisis for him isn’t visible in any external way. He’s writing a lot, and well; he’s partying in London; he’s working closely with Paul and committed to the group. Contrast this with a year later, when he’s holed up in Montague Square doing H, and basically slamming his hand down on every self-destruct button he can reach.

Sometimes I think the inciting incident was something external, something private that happened in the world—John and Paul started having sex, or stopped, or talked about it, or stopped talking about it; perhaps something powerful happened inside the friendship at the core of the Beatles. One of them said or did something, and the other guy got mad, or felt betrayed, or something.

But increasingly I think it was a meditation-induced breakdown (called among those of us who know “a spiritual emergency” or “kundalini emergency”) which broke something in Lennon that had managed to stay whole for all of Beatlemania. It could’ve been fixed, and should’ve been fixed, or better yet never should’ve happened. Harrison meditated just as much, but had no such breakdown, probably because he’d tapered off drugs earlier, and had been studying with established Hindu teachers for 18 months before heading off to Rishikesh.

I do not know. It may not be knowable. But @Matt’s right, and Peter Jackson’s right too, in spite of himself: India, not Get Back, is the core of the breakup.

The Beatles and India documentary

“Yesterday,” the film: slight but fun