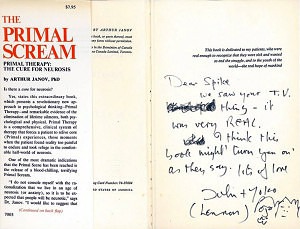 After watching a TV program on Spike Milligan’s battle with depression, John Lennon sent the comedian a book.

In the comments on the John and Mimi post, @Karen and some others have elucidated a theory that I’ve toyed with for years, myself: that John Lennon, Chief Beatle and beloved by all denizens of Dullblog, suffered from bipolar disorder.

Formerly called manic depression, bipolar disorder is “a condition in which a person has periods of depression and periods of being extremely happy or being cross or irritable. In addition to these mood swings, the person also has extreme changes in activity and energy levels.” (Definition courtesy of the University of Maryland Medical Center.)

The U of M page goes on:

The manic phase may last from days to months. It can include these symptoms:

Easily distracted
Little need for sleep
Poor judgment
Poor temper control
Reckless behavior and lack of self-control such as drinking, drug use, sex with many partners, spending sprees
Very irritable mood, such as racing thoughts, talking a lot, false beliefs about self or abilities
Very involved in activities

The depressive episode may include these symptoms:

Daily low mood or sadness
Difficulty concentrating, remembering, or making decisions
Eating problems such as loss of appetite and weight loss, or overeating and weight gain
Fatigue or lack of energy
Feeling worthless, hopeless, or guilty
Loss of pleasure in activities once enjoyed
Loss of self-esteem
Thoughts of death or suicide
Trouble getting to sleep or sleeping too much
Pulling away from friends or activities that were once enjoyed

Persons with bipolar disorder are at high risk of suicide, [and using] alcohol [or] other substances.
This can make the symptoms and suicide risk worse.

Episodes of depression are more common than episodes of mania. The pattern is not the same in all persons with bipolar disorder:

For me, there’s a lot here that resonates with John Lennon. From what we know about his life, let us address this issue, and see if we can’t come to some reasonable conclusion. Was John Lennon bipolar? And more to the point: how can the etiology of bipolar disorder explain and illuminate the story of John Lennon’s life, and the story of the Beatles?