The Jets and The Beatles 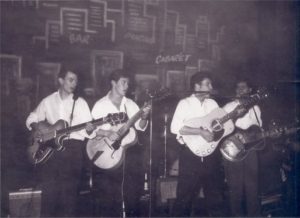 Rick Richards, far right, with the Jets. Tony Sheridan is beside him.

Sometimes the musings of artists about the Beatles who knew them in the early days are pretty amusing.  Take, for example, Rick Richards’ memories of The Beatles while they were performing together at Der Kaiserkeller:

…[Bruno] Koschmider engaged the Beatles through Alan Williams to play at another club he owned called the ‘Indra’. The Indra although in the same street as the Kaiserkeller (the Grosse Freiheit) was someway away from it where the main crowd never seemed to reach, and consequently didn’t get the custom it should have. We (The Jets) went to see the Beatles there and honestly were not over impressed. They were quite raw, had little idea of showmanship and at that time of course didn’t do any original material. Bruno Koschmider would shout out at them whilst on stage, ‘Mach Schau, Mach Schau’ – ‘Make a show!’ My God how quickly they learned!

Later Koschmider transferred the Beatles to the Kaiserkeller and it was apparent how much they had improved. They were now much more professional but what I remember most from those early performances was the sight of bass player Stuart Sutcliffe playing and singing the old Carl Perkins song ‘Matchbox’. He looked really different from the other Beatles. In retrospect he seemed something of a lonely figure, and he didn’t even look like the other members of the group. The rest of the Beatles were dressed casually and irregularly whilst Stuart deliberately tried to look like James Dean. I don’t think it was a surprise when he left the group. I would describe it as more like inevitable.

I didn’t have any trouble getting on with the Beatles, they were just normal friendly people. The only exception was John Lennon. I know I’m going to upset some people by saying this, but I found him somewhat bitter and sarcastic. I remember once whilst making a visit to Hamburg in May or June 1962 when the Beatles were playing at the newly opened Star Club, asking John how Stuart was getting on at art college. His reply was a terse ‘He’s bleeding dead!’. Of course the Beatles at that time were not yet famous and his passing was of no interest to the media, therefore I had no knowledge of his death. I must admit that I was less shocked by the news of Stuart’s demise (which was only a month or so earlier) as by Johns apparent reaction to it. I am sure his attitude was only a front and was if anything a sign of insecurity. Whether he changed after stardom I don’t know, but his habit of looking for a smartarse answer I found somewhat distasteful. If anyone thinks that being a super rich superstar prevents someone from being insecure I would disagree with them. Quite honestly with John’s early childhood experiences it would be an enormous surprise if he didn’t have some hangups, and although it would be difficult for me to remember him with great affection, it is very easy to remember him as a genius of modern song writing and a great campaigner for human rights.